How to uninstall ccc-core-static from your system

ccc-core-static is a computer program. This page holds details on how to remove it from your PC. It was coded for Windows by ATI. Check out here where you can get more info on ATI. You can read more about about ccc-core-static at http://www.ati.com. The application is often installed in the C:\Program Files (x86)\ATI Technologies folder. Keep in mind that this location can vary being determined by the user's preference. The application's main executable file occupies 52.00 KB (53248 bytes) on disk and is called CCCInstall.exe.

The following executable files are incorporated in ccc-core-static. They occupy 3.09 MB (3244032 bytes) on disk.

How to remove ccc-core-static with Advanced Uninstaller PRO

ccc-core-static is a program released by the software company ATI. Sometimes, people decide to erase this program. Sometimes this is efortful because doing this manually takes some knowledge regarding Windows internal functioning. One of the best QUICK manner to erase ccc-core-static is to use Advanced Uninstaller PRO. Take the following steps on how to do this:


7. Press the Uninstall button. A confirmation page will come up. accept the uninstall by pressing Uninstall. Advanced Uninstaller PRO will automatically uninstall ccc-core-static. 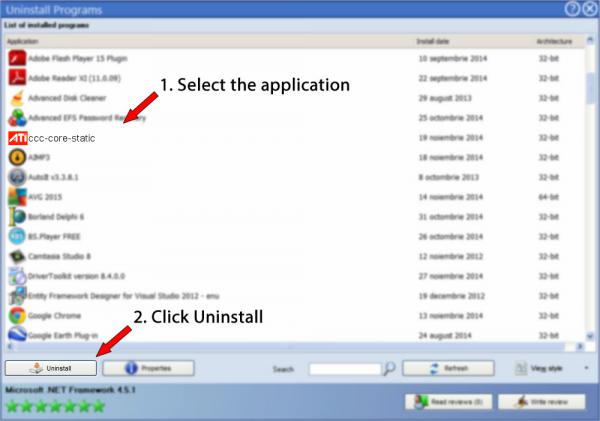