You can find on this page detailed information on how to remove Conexant HD Audio for Windows. It was created for Windows by Conexant. Check out here where you can find out more on Conexant. Usually the Conexant HD Audio program is to be found in the C:\Program Files\CONEXANT\CNXT_AUDIO_HDA folder, depending on the user's option during setup. You can uninstall Conexant HD Audio by clicking on the Start menu of Windows and pasting the command line C:\Program Files\CONEXANT\CNXT_AUDIO_HDA\UIU64a.exe -U -IGQSAHery.INF. Note that you might receive a notification for administrator rights. The program's main executable file occupies 1.26 MB (1316864 bytes) on disk and is labeled UIU64a.exe.

The executable files below are installed beside Conexant HD Audio. They take about 1.26 MB (1316864 bytes) on disk.


7. Press the Uninstall button. A window asking you to confirm will come up. Confirm the removal by pressing Uninstall. Advanced Uninstaller PRO will then uninstall Conexant HD Audio. 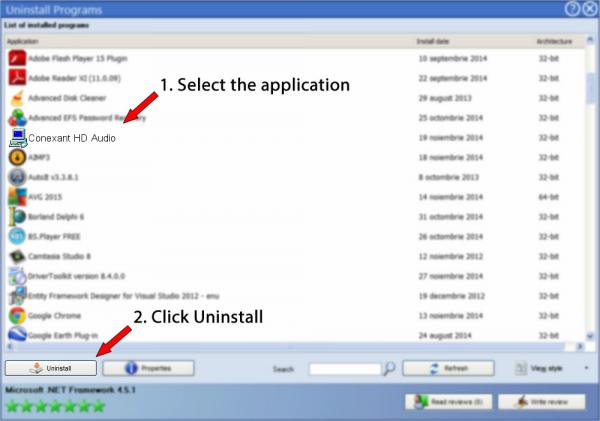