A way to uninstall Conexant HD Audio from your PC

This web page is about Conexant HD Audio for Windows. Below you can find details on how to remove it from your computer. It was coded for Windows by Conexant. Go over here where you can read more on Conexant. The program is often installed in the C:\Program Files\CONEXANT\CNXT_AUDIO_HDA directory. Take into account that this path can vary depending on the user's decision. Conexant HD Audio's entire uninstall command line is C:\Program Files\CONEXANT\CNXT_AUDIO_HDA\UIU32a.exe -U -G -IE13CC2xa.inf. The program's main executable file has a size of 3.14 MB (3294936 bytes) on disk and is titled UIU32a.exe.

Conexant HD Audio is comprised of the following executables which take 3.14 MB (3294936 bytes) on disk:

Conexant HD Audio is a program marketed by Conexant. Some computer users try to remove this application. This is efortful because doing this by hand requires some know-how related to removing Windows programs manually. The best EASY solution to remove Conexant HD Audio is to use Advanced Uninstaller PRO. Here are some detailed instructions about how to do this: 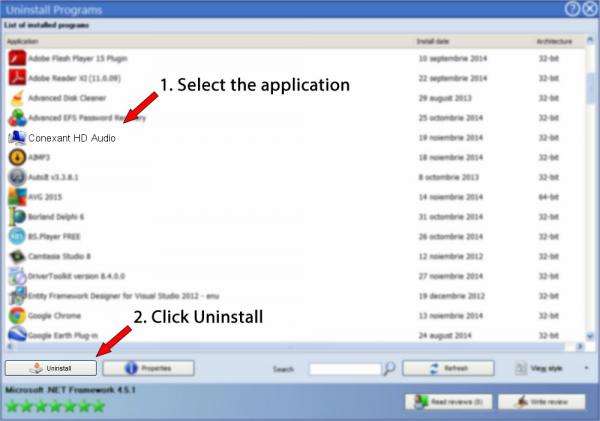