This page is about Conexant HD Audio for Windows. Below you can find details on how to uninstall it from your computer. It was created for Windows by Conexant. Additional info about Conexant can be read here. Conexant HD Audio is typically installed in the C:\Program Files (x86)\InstallShield Installation Information\{F0A37341-D692-11D4-A984-009027EC0A9C} folder, however this location may vary a lot depending on the user's option when installing the program. Conexant HD Audio's complete uninstall command line is C:\Program Files (x86)\InstallShield Installation Information\{F0A37341-D692-11D4-A984-009027EC0A9C}\setup.exe -runfromtemp -l0x0009 -removeonly. Conexant HD Audio's main file takes about 448.66 KB (459432 bytes) and is called setup.exe.

...click to view all...
If you are manually uninstalling Conexant HD Audio we advise you to verify if the following data is left behind on your PC.

Conexant HD Audio is an application released by Conexant. Sometimes, computer users want to remove it. This is difficult because uninstalling this manually requires some skill regarding Windows internal functioning. One of the best SIMPLE action to remove Conexant HD Audio is to use Advanced Uninstaller PRO. Take the following steps on how to do this:


7. Press the Uninstall button. A window asking you to confirm will appear. Confirm the uninstall by clicking Uninstall. Advanced Uninstaller PRO will then remove Conexant HD Audio. 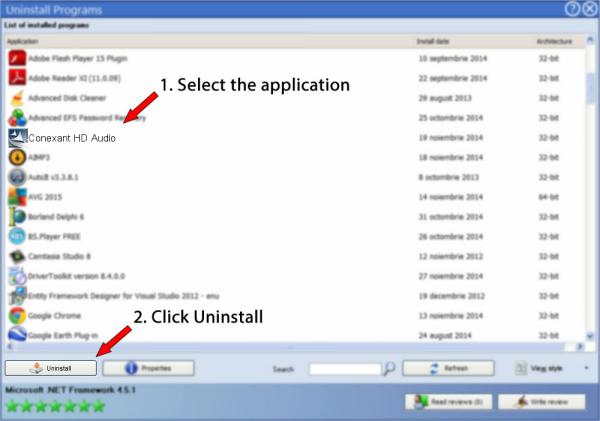