A way to uninstall Google Chrome Bèta from your PC

This page contains detailed information on how to remove Google Chrome Bèta for Windows. The Windows version was developed by Google Inc.. More information on Google Inc. can be found here. The program is frequently located in the C:\Program Files (x86)\Google\Chrome Beta\Application directory. Take into account that this path can differ being determined by the user's choice. C:\Program Files (x86)\Google\Chrome Beta\Application\67.0.3396.62\Installer\setup.exe is the full command line if you want to remove Google Chrome Bèta. chrome.exe is the Google Chrome Bèta's primary executable file and it occupies around 1.51 MB (1588568 bytes) on disk.

The following executable files are contained in Google Chrome Bèta. They take 5.74 MB (6015328 bytes) on disk.

Google Chrome Bèta is a program released by Google Inc.. Sometimes, computer users choose to erase this program. Sometimes this can be difficult because uninstalling this by hand requires some skill regarding Windows internal functioning. One of the best SIMPLE practice to erase Google Chrome Bèta is to use Advanced Uninstaller PRO. Here is how to do this: 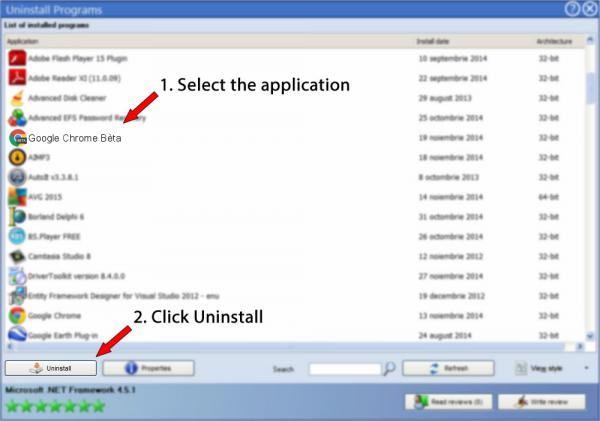