A guide to uninstall Box Rock from your system

Box Rock is a Windows program. Read more about how to uninstall it from your PC. The Windows release was developed by Box Rock. Check out here where you can read more on Box Rock. You can get more details on Box Rock at http://boxrock.info/support. Box Rock is commonly installed in the C:\Archivos de programa\Box Rock folder, but this location may vary a lot depending on the user's option while installing the program. You can uninstall Box Rock by clicking on the Start menu of Windows and pasting the command line C:\Archivos de programa\Box Rock\BoxRockuninstall.exe. Keep in mind that you might receive a notification for administrator rights. BoxRock.BrowserAdapter.exe is the programs's main file and it takes around 103.23 KB (105704 bytes) on disk.

The following executables are installed along with Box Rock. They take about 2.13 MB (2238664 bytes) on disk.

Box Rock is a program released by the software company Box Rock. Some users try to erase it. This can be difficult because doing this by hand takes some know-how regarding removing Windows applications by hand. One of the best SIMPLE approach to erase Box Rock is to use Advanced Uninstaller PRO. Take the following steps on how to do this:

6. Scroll the list of programs until you locate Box Rock or simply activate the Search feature and type in "Box Rock". If it is installed on your PC the Box Rock program will be found very quickly. When you select Box Rock in the list of apps, the following data regarding the program is available to you:


For example you can see that for Box Rock:

7. Press the Uninstall button. A confirmation dialog will appear. Confirm the removal by pressing Uninstall. Advanced Uninstaller PRO will then remove Box Rock. 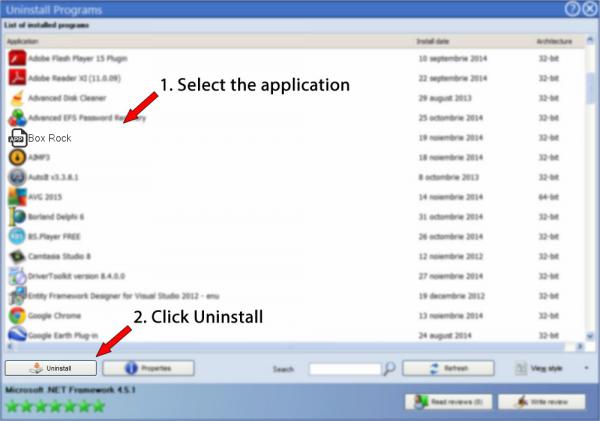 This page is not a recommendation to uninstall Box Rock by Box Rock from your PC, nor are we saying that Box Rock by Box Rock is not a good application for your computer. This text only contains detailed instructions on how to uninstall Box Rock in case you want to. The information above contains registry and disk entries that other software left behind and Advanced Uninstaller PRO discovered and classified as "leftovers" on other users' PCs.