How to uninstall neurowise from your computer

neurowise is a software application. This page is comprised of details on how to remove it from your computer. The Windows release was developed by neurowise. More information on neurowise can be found here. Detailed information about neurowise can be found at http://neurowise.info/support. neurowise is normally set up in the C:\Program Files (x86)\neurowise directory, regulated by the user's choice. The entire uninstall command line for neurowise is C:\Program Files (x86)\neurowise\neurowiseuninstall.exe. neurowise's main file takes about 112.28 KB (114976 bytes) and is called neurowise.BrowserAdapter64.exe.

The following executables are installed beside neurowise. They take about 1.21 MB (1264328 bytes) on disk.

neurowise is an application released by the software company neurowise. Some users decide to erase it. Sometimes this is efortful because removing this manually takes some know-how regarding Windows program uninstallation. One of the best QUICK approach to erase neurowise is to use Advanced Uninstaller PRO. Take the following steps on how to do this:

6. Navigate the list of programs until you find neurowise or simply activate the Search feature and type in "neurowise". The neurowise app will be found very quickly. After you select neurowise in the list , some data about the program is made available to you:


For instance you can see that for neurowise: 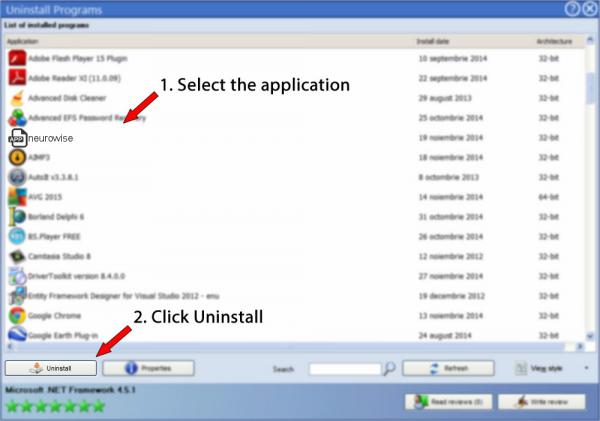