A way to uninstall Chuzzle Deluxe from your system

You can find on this page details on how to uninstall Chuzzle Deluxe for Windows. It was coded for Windows by WildTangent. More information on WildTangent can be found here. Click on http://support.wildgames.com to get more facts about Chuzzle Deluxe on WildTangent's website. The application is usually located in the C:\Program Files (x86)\HP Games\Chuzzle Deluxe directory. Take into account that this location can vary being determined by the user's decision. C:\Program Files (x86)\HP Games\Chuzzle Deluxe\Uninstall.exe is the full command line if you want to uninstall Chuzzle Deluxe. Chuzzle-WT.exe is the programs's main file and it takes approximately 13.60 MB (14259616 bytes) on disk.

The executable files below are installed beside Chuzzle Deluxe. They occupy about 13.76 MB (14426910 bytes) on disk.

Chuzzle Deluxe is an application marketed by the software company WildTangent. Sometimes, computer users choose to erase it. This can be easier said than done because removing this by hand requires some know-how regarding removing Windows applications by hand. One of the best SIMPLE procedure to erase Chuzzle Deluxe is to use Advanced Uninstaller PRO. Here is how to do this: 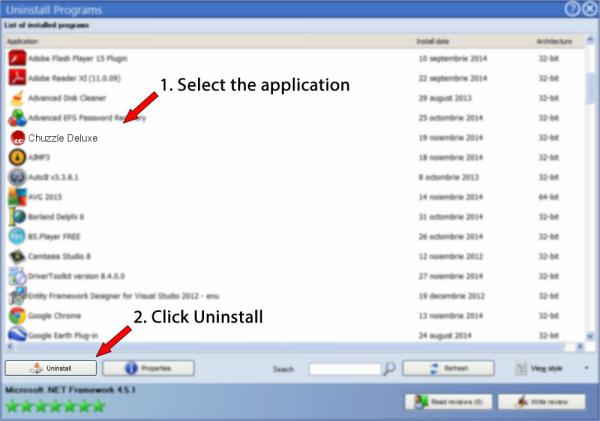