How to uninstall Chuzzle Deluxe from your computer

This info is about Chuzzle Deluxe for Windows. Below you can find details on how to uninstall it from your PC. The Windows version was created by WildTangent. Go over here for more info on WildTangent. You can read more about related to Chuzzle Deluxe at http://support.wildgames.com. The program is frequently placed in the C:\Archivos de programa\HP Games\Chuzzle Deluxe directory. Keep in mind that this path can differ depending on the user's choice. Chuzzle Deluxe's complete uninstall command line is "C:\Archivos de programa\HP Games\Chuzzle Deluxe\Uninstall.exe". The program's main executable file is called Chuzzle-WT.exe and it has a size of 1.31 MB (1376836 bytes).

The executable files below are installed together with Chuzzle Deluxe. They occupy about 1.35 MB (1412821 bytes) on disk.

Chuzzle Deluxe is a program offered by WildTangent. Sometimes, users want to uninstall it. Sometimes this is easier said than done because doing this by hand requires some knowledge related to Windows internal functioning. The best SIMPLE solution to uninstall Chuzzle Deluxe is to use Advanced Uninstaller PRO. Take the following steps on how to do this: 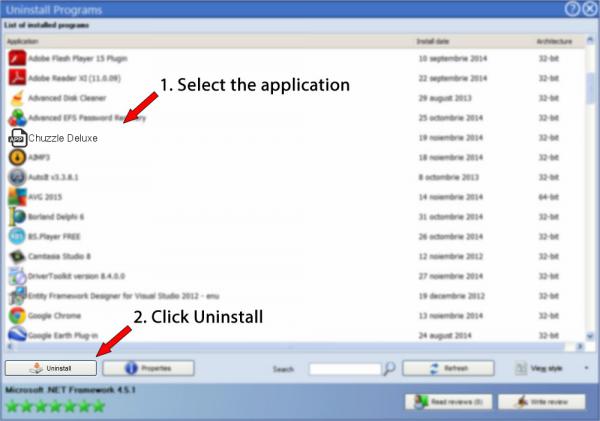