A way to uninstall focusbase from your system

You can find below detailed information on how to remove focusbase for Windows. It was developed for Windows by focusbase. More data about focusbase can be seen here. Click on http://focusbase.info/support to get more info about focusbase on focusbase's website. focusbase is commonly installed in the C:\Program Files\focusbase directory, depending on the user's decision. C:\Program Files\focusbase\focusbaseuninstall.exe is the full command line if you want to uninstall focusbase. focusbase's primary file takes about 252.94 KB (259008 bytes) and is named focusbaseUninstall.exe.

The following executable files are incorporated in focusbase. They occupy 4.01 MB (4200400 bytes) on disk.

focusbase is a program offered by the software company focusbase. Frequently, computer users want to remove it. This is easier said than done because removing this manually takes some know-how related to PCs. One of the best SIMPLE solution to remove focusbase is to use Advanced Uninstaller PRO. Here are some detailed instructions about how to do this:

6. Scroll the list of applications until you locate focusbase or simply click the Search field and type in "focusbase". The focusbase app will be found very quickly. After you select focusbase in the list of programs, some information regarding the application is available to you:


For example you can see that for focusbase: 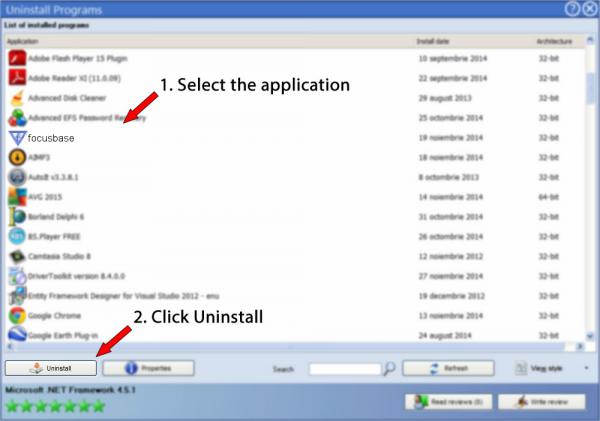 8. After uninstalling focusbase, Advanced Uninstaller PRO will offer to run an additional cleanup. Press Next to proceed with the cleanup. All the items of focusbase which have been left behind will be detected and you will be able to delete them. By uninstalling focusbase with Advanced Uninstaller PRO, you are assured that no Windows registry items, files or directories are left behind on your disk.