A way to uninstall focusbase from your computer

You can find below details on how to uninstall focusbase for Windows. The Windows version was developed by focusbase. More information on focusbase can be found here. More info about the app focusbase can be found at http://focusbase.info/support. The application is frequently installed in the C:\Program Files (x86)\focusbase folder (same installation drive as Windows). The full uninstall command line for focusbase is C:\Program Files (x86)\focusbase\focusbaseuninstall.exe. The application's main executable file is labeled 7za.exe and its approximative size is 523.50 KB (536064 bytes).

focusbase installs the following the executables on your PC, occupying about 523.50 KB (536064 bytes) on disk.

The information on this page is only about version 2014.08.06.023049 of focusbase. You can find below info on other releases of focusbase:

focusbase is an application released by the software company focusbase. Frequently, people want to uninstall this program. Sometimes this is difficult because deleting this by hand requires some knowledge related to removing Windows programs manually. The best EASY procedure to uninstall focusbase is to use Advanced Uninstaller PRO. Here are some detailed instructions about how to do this:


For example you can see that for focusbase:

7. Press the Uninstall button. A window asking you to confirm will show up. accept the removal by clicking Uninstall. Advanced Uninstaller PRO will remove focusbase. 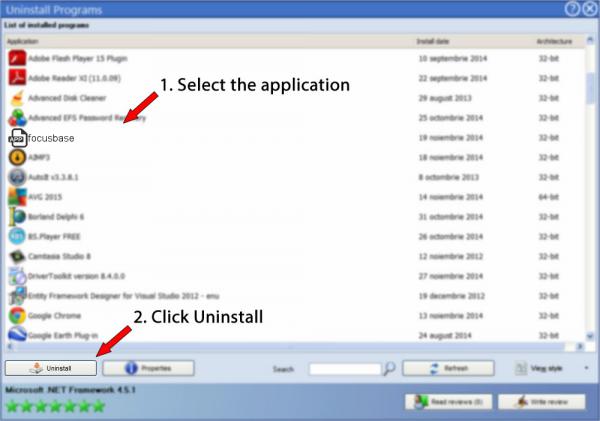 8. After removing focusbase, Advanced Uninstaller PRO will offer to run an additional cleanup. Press Next to perform the cleanup. All the items of focusbase that have been left behind will be found and you will be able to delete them. By uninstalling focusbase using Advanced Uninstaller PRO, you can be sure that no Windows registry entries, files or folders are left behind on your disk.