How to uninstall MusiCalm from your computer

MusiCalm is a Windows program. Read below about how to remove it from your computer. The Windows release was created by MusiCalm. Further information on MusiCalm can be found here. MusiCalm is frequently installed in the C:\Users\UserName\AppData\Roaming\MusiCalm folder, however this location may differ a lot depending on the user's decision while installing the program. C:\Users\UserName\AppData\Roaming\MusiCalm\Uninstall.exe is the full command line if you want to remove MusiCalm. The program's main executable file has a size of 27.78 MB (29125664 bytes) on disk and is titled MusiCalm.exe.


MusiCalm has the habit of leaving behind some leftovers.

MusiCalm is a program by MusiCalm. Some people try to erase this program. Sometimes this can be difficult because uninstalling this by hand takes some advanced knowledge related to Windows program uninstallation. The best QUICK action to erase MusiCalm is to use Advanced Uninstaller PRO. Here is how to do this:

6. Navigate the list of applications until you locate MusiCalm or simply activate the Search field and type in "MusiCalm". If it exists on your system the MusiCalm program will be found very quickly. Notice that after you select MusiCalm in the list of programs, some data regarding the application is made available to you:


7. Press the Uninstall button. A window asking you to confirm will come up. Confirm the removal by clicking Uninstall. Advanced Uninstaller PRO will remove MusiCalm. 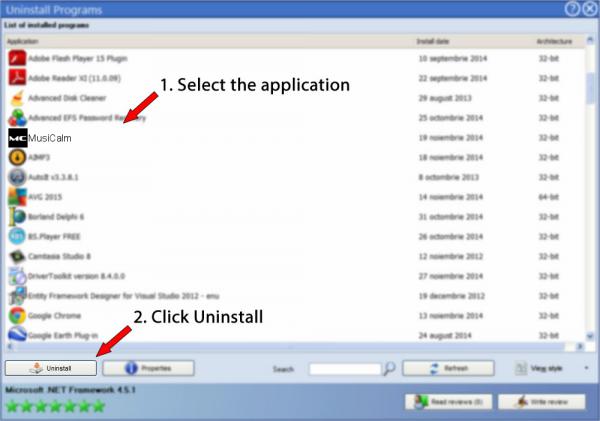 8. After uninstalling MusiCalm, Advanced Uninstaller PRO will offer to run an additional cleanup. Press Next to go ahead with the cleanup. All the items of MusiCalm which have been left behind will be found and you will be asked if you want to delete them. By removing MusiCalm with Advanced Uninstaller PRO, you can be sure that no registry items, files or folders are left behind on your disk.