A way to uninstall LiveTuner from your PC

This web page is about LiveTuner for Windows. Here you can find details on how to uninstall it from your computer. It was created for Windows by Windows X. Go over here for more information on Windows X. More information about LiveTuner can be found at http://www.windowsxlive.net/livetuner. LiveTuner is commonly installed in the C:\Program Files (x86)\LiveTuner folder, but this location may differ a lot depending on the user's decision while installing the application. C:\Program Files (x86)\LiveTuner\liveuninst.exe is the full command line if you want to remove LiveTuner. LiveTuner's primary file takes around 217.49 KB (222711 bytes) and is named livecore.exe.


Several files, folders and registry entries will not be uninstalled when you want to remove LiveTuner from your computer.

Folders that were left behind:

LiveTuner is an application marketed by the software company Windows X. Some computer users want to remove this program. This can be efortful because uninstalling this manually takes some advanced knowledge regarding removing Windows applications by hand. The best EASY action to remove LiveTuner is to use Advanced Uninstaller PRO. Here are some detailed instructions about how to do this:

6. Scroll the list of programs until you find LiveTuner or simply activate the Search feature and type in "LiveTuner". If it is installed on your PC the LiveTuner app will be found automatically. Notice that after you select LiveTuner in the list of applications, some data regarding the application is made available to you:


For example you can see that for LiveTuner: 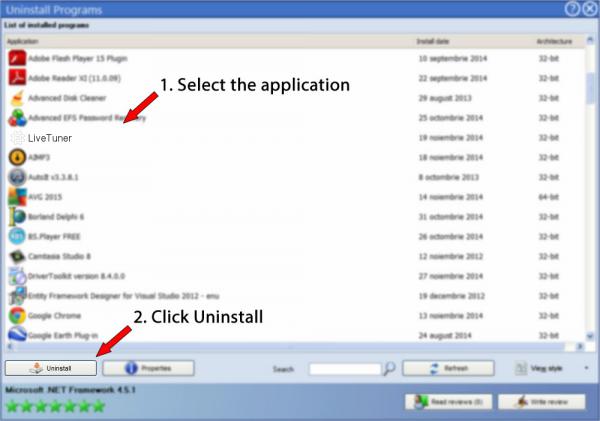 8. After uninstalling LiveTuner, Advanced Uninstaller PRO will offer to run an additional cleanup. Press Next to start the cleanup. All the items that belong LiveTuner that have been left behind will be detected and you will be asked if you want to delete them. By uninstalling LiveTuner using Advanced Uninstaller PRO, you are assured that no Windows registry entries, files or directories are left behind on your computer.

The text above is not a recommendation to remove LiveTuner by Windows X from your computer, nor are we saying that LiveTuner by Windows X is not a good application. This text simply contains detailed info on how to remove LiveTuner supposing you want to. The information above contains registry and disk entries that our application Advanced Uninstaller PRO stumbled upon and classified as "leftovers" on other users' PCs.