A way to uninstall Hatchiho from your PC

You can find below details on how to remove Hatchiho for Windows. The Windows release was developed by Hatchiho. Go over here where you can read more on Hatchiho. Click on http://hatchiho.com/support to get more facts about Hatchiho on Hatchiho's website. Hatchiho is normally installed in the C:\Program Files (x86)\Hatchiho directory, subject to the user's decision. The full command line for uninstalling Hatchiho is C:\Program Files (x86)\Hatchiho\HatchihoUn.exe OFS_. Note that if you will type this command in Start / Run Note you may get a notification for administrator rights. Hatchiho's primary file takes about 1.71 MB (1791208 bytes) and is named Hatchiho.BOAS.exe.

Hatchiho installs the following the executables on your PC, occupying about 8.98 MB (9418808 bytes) on disk.

The current page applies to Hatchiho version 2015.04.21.235002 only. You can find below a few links to other Hatchiho releases:

Hatchiho is an application by Hatchiho. Sometimes, people decide to remove this application. Sometimes this can be troublesome because performing this manually takes some experience regarding Windows internal functioning. One of the best SIMPLE practice to remove Hatchiho is to use Advanced Uninstaller PRO. Take the following steps on how to do this:

6. Scroll the list of applications until you find Hatchiho or simply click the Search field and type in "Hatchiho". If it exists on your system the Hatchiho app will be found automatically. After you click Hatchiho in the list , some data about the program is made available to you:


For example you can see that for Hatchiho:

7. Click the Uninstall button. A confirmation dialog will come up. accept the uninstall by clicking Uninstall. Advanced Uninstaller PRO will remove Hatchiho. 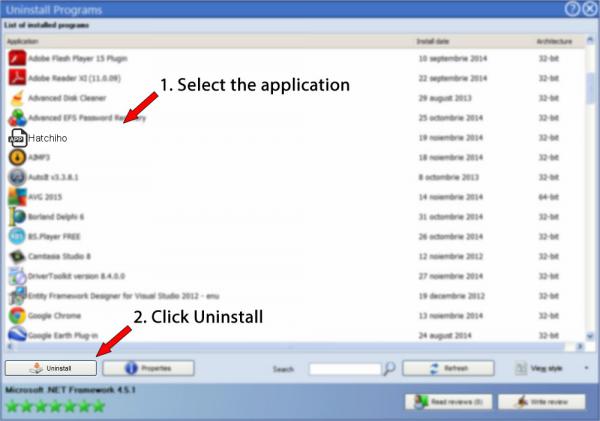 8. After uninstalling Hatchiho, Advanced Uninstaller PRO will ask you to run an additional cleanup. Press Next to go ahead with the cleanup. All the items of Hatchiho that have been left behind will be found and you will be asked if you want to delete them. By removing Hatchiho using Advanced Uninstaller PRO, you are assured that no registry entries, files or directories are left behind on your disk.

The text above is not a piece of advice to remove Hatchiho by Hatchiho from your computer, we are not saying that Hatchiho by Hatchiho is not a good software application. This text simply contains detailed info on how to remove Hatchiho supposing you decide this is what you want to do. The information above contains registry and disk entries that other software left behind and Advanced Uninstaller PRO discovered and classified as "leftovers" on other users' computers.