A guide to uninstall BuzzWord from your computer

This page contains complete information on how to remove BuzzWord for Windows. It was created for Windows by Buzz Tools, Inc.. Check out here where you can get more info on Buzz Tools, Inc.. More information about BuzzWord can be found at www.buzztools.com. Usually the BuzzWord application is placed in the C:\Program Files (x86)\Buzz Tools\BuzzWord directory, depending on the user's option during setup. The full command line for removing BuzzWord is C:\WINDOWS\BuzzWord\uninstall.exe. Keep in mind that if you will type this command in Start / Run Note you might receive a notification for admin rights. BuzzWord.exe is the BuzzWord's primary executable file and it takes about 2.69 MB (2824528 bytes) on disk.

The information on this page is only about version 1.08326 of BuzzWord. You can find here a few links to other BuzzWord versions:


If you are manually uninstalling BuzzWord we recommend you to verify if the following data is left behind on your PC.

The files below were left behind on your disk when you remove BuzzWord:

Supplementary values that are not cleaned:

How to remove BuzzWord with Advanced Uninstaller PRO

BuzzWord is a program by the software company Buzz Tools, Inc.. Frequently, computer users try to remove it. Sometimes this can be easier said than done because uninstalling this by hand requires some advanced knowledge regarding removing Windows programs manually. The best QUICK action to remove BuzzWord is to use Advanced Uninstaller PRO. Here are some detailed instructions about how to do this:

6. Scroll the list of applications until you locate BuzzWord or simply activate the Search feature and type in "BuzzWord". The BuzzWord application will be found very quickly. Notice that after you click BuzzWord in the list of programs, the following data regarding the application is shown to you:


For example you can see that for BuzzWord:

7. Click the Uninstall button. A confirmation window will come up. Confirm the uninstall by pressing Uninstall. Advanced Uninstaller PRO will then uninstall BuzzWord. 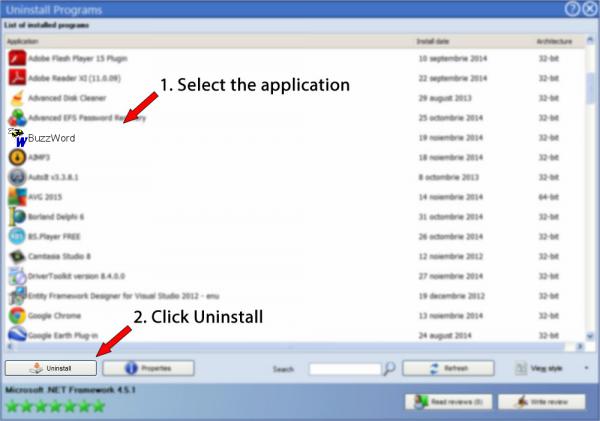 8. After removing BuzzWord, Advanced Uninstaller PRO will offer to run a cleanup. Click Next to perform the cleanup. All the items of BuzzWord which have been left behind will be found and you will be asked if you want to delete them. By removing BuzzWord using Advanced Uninstaller PRO, you are assured that no Windows registry entries, files or folders are left behind on your system.

This page is not a recommendation to remove BuzzWord by Buzz Tools, Inc. from your computer, nor are we saying that BuzzWord by Buzz Tools, Inc. is not a good application for your PC. This page only contains detailed info on how to remove BuzzWord supposing you want to. The information above contains registry and disk entries that Advanced Uninstaller PRO discovered and classified as "leftovers" on other users' PCs.