A way to uninstall Brick-Force from your PC

This web page contains complete information on how to remove Brick-Force for Windows. The Windows release was developed by Axeso5. Take a look here for more info on Axeso5. You can read more about on Brick-Force at http://www.axeso5.com/. Brick-Force is commonly set up in the C:\Program Files (x86)\Axeso5\Brick Force folder, however this location may differ a lot depending on the user's choice while installing the application. Brick-Force's full uninstall command line is C:\Program Files (x86)\Axeso5\Brick Force\Uninstall.exe. The program's main executable file is called BfLauncher.exe and its approximative size is 874.33 KB (895312 bytes).

The current web page applies to Brick-Force version 20140730 only. You can find below info on other application versions of Brick-Force:


After the uninstall process, the application leaves some files behind on the computer. Some of these are shown below.

The files below remain on your disk when you remove Brick-Force:

Many times the following registry data will not be cleaned:

Brick-Force is an application marketed by Axeso5. Sometimes, users try to erase this application. This is easier said than done because performing this by hand takes some advanced knowledge related to PCs. The best SIMPLE solution to erase Brick-Force is to use Advanced Uninstaller PRO. Take the following steps on how to do this:

6. Scroll the list of programs until you find Brick-Force or simply activate the Search feature and type in "Brick-Force". If it exists on your system the Brick-Force application will be found automatically. Notice that after you select Brick-Force in the list , the following data about the application is shown to you:


For instance you can see that for Brick-Force: 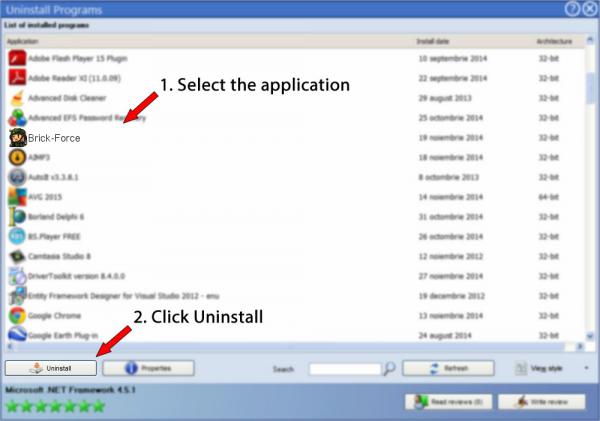 This page is not a piece of advice to uninstall Brick-Force by Axeso5 from your PC, we are not saying that Brick-Force by Axeso5 is not a good application for your PC. This text simply contains detailed instructions on how to uninstall Brick-Force in case you decide this is what you want to do. The information above contains registry and disk entries that Advanced Uninstaller PRO stumbled upon and classified as "leftovers" on other users' computers.