How to uninstall Blazer Deals from your system

Blazer Deals is a software application. This page holds details on how to uninstall it from your computer. It was coded for Windows by Blazer Deals. Further information on Blazer Deals can be found here. Further information about Blazer Deals can be seen at http://www.blazerdeals.net/support. The application is usually placed in the C:\Program Files (x86)\Blazer Deals folder. Keep in mind that this path can differ being determined by the user's choice. The full command line for uninstalling Blazer Deals is "C:\Program Files (x86)\Blazer Deals\uninstaller.exe". Keep in mind that if you will type this command in Start / Run Note you might receive a notification for admin rights. The application's main executable file is called Uninstaller.exe and its approximative size is 305.84 KB (313184 bytes).

Blazer Deals installs the following the executables on your PC, taking about 829.34 KB (849248 bytes) on disk.

The information on this page is only about version 2.0.5753.17488 of Blazer Deals. You can find below a few links to other Blazer Deals versions:

Blazer Deals is an application by Blazer Deals. Frequently, people want to erase this program. Sometimes this is troublesome because removing this manually requires some advanced knowledge related to Windows program uninstallation. One of the best SIMPLE action to erase Blazer Deals is to use Advanced Uninstaller PRO. Here is how to do this:


For instance you can see that for Blazer Deals:

7. Press the Uninstall button. A confirmation page will show up. Confirm the uninstall by clicking Uninstall. Advanced Uninstaller PRO will then uninstall Blazer Deals. 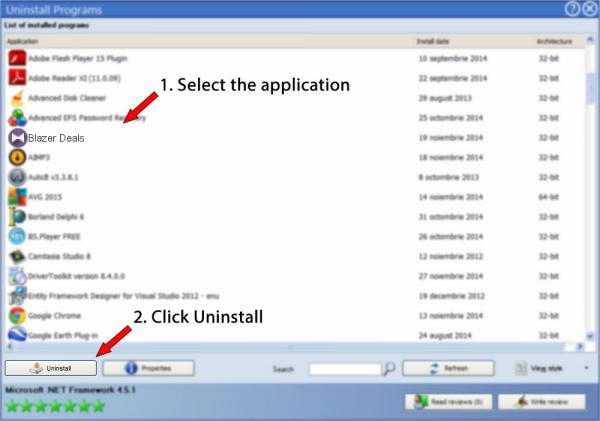