A guide to uninstall NotePro from your system

NotePro is a software application. This page holds details on how to remove it from your computer. It is developed by Crystal Office Systems. Go over here where you can find out more on Crystal Office Systems. More details about NotePro can be seen at http://www.crystaloffice.com. Usually the NotePro application is to be found in the C:\Program Files (x86)\NotePro directory, depending on the user's option during setup. You can remove NotePro by clicking on the Start menu of Windows and pasting the command line C:\Program Files (x86)\NotePro\unins000.exe. Note that you might receive a notification for administrator rights. NotePro's main file takes about 5.95 MB (6238208 bytes) and is named notepro.exe.

The following executable files are contained in NotePro. They occupy 6.64 MB (6966704 bytes) on disk.

How to remove NotePro from your PC using Advanced Uninstaller PRO

NotePro is a program marketed by Crystal Office Systems. Frequently, people want to erase this application. Sometimes this is hard because uninstalling this manually takes some knowledge related to removing Windows programs manually. The best SIMPLE practice to erase NotePro is to use Advanced Uninstaller PRO. Take the following steps on how to do this:


For instance you can see that for NotePro:

7. Press the Uninstall button. A window asking you to confirm will come up. Confirm the removal by clicking Uninstall. Advanced Uninstaller PRO will uninstall NotePro. 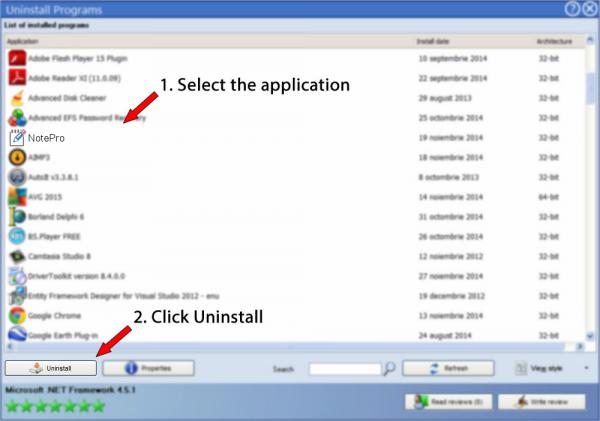 8. After uninstalling NotePro, Advanced Uninstaller PRO will offer to run a cleanup. Press Next to proceed with the cleanup. All the items of NotePro which have been left behind will be detected and you will be able to delete them. By uninstalling NotePro with Advanced Uninstaller PRO, you are assured that no Windows registry entries, files or directories are left behind on your computer.

This page is not a recommendation to remove NotePro by Crystal Office Systems from your PC, nor are we saying that NotePro by Crystal Office Systems is not a good application. This text simply contains detailed info on how to remove NotePro in case you want to. Here you can find registry and disk entries that Advanced Uninstaller PRO stumbled upon and classified as "leftovers" on other users' computers.