A way to uninstall NBC Direct from your system

NBC Direct is a Windows program. Read below about how to uninstall it from your PC. The Windows release was developed by NBC Universal. More information on NBC Universal can be seen here. NBC Direct is commonly set up in the C:\Program Files (x86)\NBC Direct directory, however this location can differ a lot depending on the user's option while installing the application. NBC Direct's primary file takes around 1.09 MB (1146880 bytes) and its name is DirectPlayerCore.exe.

NBC Direct installs the following the executables on your PC, occupying about 1.57 MB (1643008 bytes) on disk.

NBC Direct is an application marketed by the software company NBC Universal. Some computer users choose to remove this program. This is hard because performing this manually takes some skill regarding Windows program uninstallation. The best SIMPLE approach to remove NBC Direct is to use Advanced Uninstaller PRO. Here is how to do this: 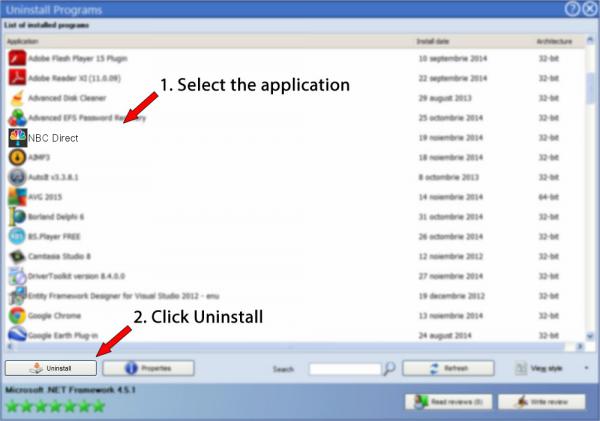 8. After removing NBC Direct, Advanced Uninstaller PRO will ask you to run a cleanup. Click Next to proceed with the cleanup. All the items of NBC Direct which have been left behind will be detected and you will be asked if you want to delete them. By removing NBC Direct with Advanced Uninstaller PRO, you are assured that no registry items, files or folders are left behind on your disk.

This page is not a piece of advice to uninstall NBC Direct by NBC Universal from your PC, we are not saying that NBC Direct by NBC Universal is not a good application for your PC. This page simply contains detailed instructions on how to uninstall NBC Direct supposing you want to. Here you can find registry and disk entries that our application Advanced Uninstaller PRO discovered and classified as "leftovers" on other users' PCs.