A guide to uninstall MAGIX Foto Manager 2008 from your computer

This web page is about MAGIX Foto Manager 2008 for Windows. Below you can find details on how to uninstall it from your computer. The Windows version was created by MAGIX AG. Further information on MAGIX AG can be found here. The application is usually located in the C:\Program Files\MAGIX\Foto_Manager_2008 folder. Keep in mind that this location can vary being determined by the user's preference. MAGIX Foto Manager 2008's complete uninstall command line is C:\Program Files\MAGIX\Foto_Manager_2008\unwise.exe. The application's main executable file occupies 10.52 MB (11033276 bytes) on disk and is called FotoMaker.exe.

MAGIX Foto Manager 2008 is an application released by the software company MAGIX AG. Sometimes, people choose to remove this program. Sometimes this is troublesome because removing this by hand takes some know-how regarding PCs. One of the best EASY solution to remove MAGIX Foto Manager 2008 is to use Advanced Uninstaller PRO. Take the following steps on how to do this: 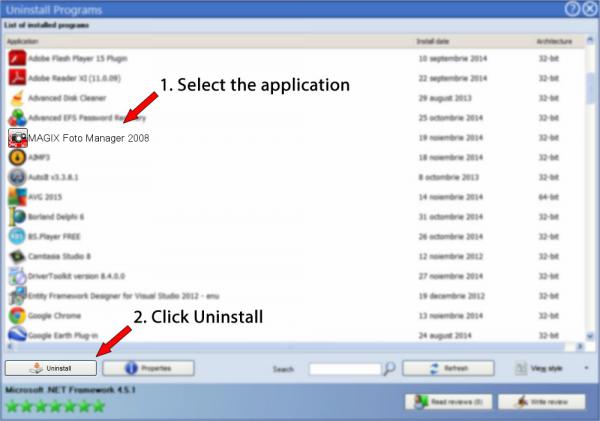