A way to uninstall Firefox from your computer

This web page contains thorough information on how to uninstall Firefox for Windows. The Windows release was developed by Mozilla. Further information on Mozilla can be found here. More details about Firefox can be seen at mts.ca. The program is often located in the C:\Program Files\Mozilla Firefox folder. Keep in mind that this location can differ being determined by the user's choice. Firefox's full uninstall command line is MsiExec.exe /I{9DC74D36-5E0B-41EB-9A0C-98DE3420C2F5}. firefox.exe is the Firefox's main executable file and it occupies about 269.11 KB (275568 bytes) on disk.

The executable files below are installed alongside Firefox. They occupy about 2.02 MB (2117464 bytes) on disk.

How to uninstall Firefox with Advanced Uninstaller PRO

Firefox is a program offered by Mozilla. Some computer users try to uninstall this program. Sometimes this can be efortful because performing this by hand takes some know-how related to removing Windows applications by hand. The best SIMPLE way to uninstall Firefox is to use Advanced Uninstaller PRO. Take the following steps on how to do this:

6. Navigate the list of programs until you locate Firefox or simply activate the Search feature and type in "Firefox". If it is installed on your PC the Firefox application will be found very quickly. Notice that when you select Firefox in the list of apps, some information regarding the program is shown to you:


For example you can see that for Firefox: 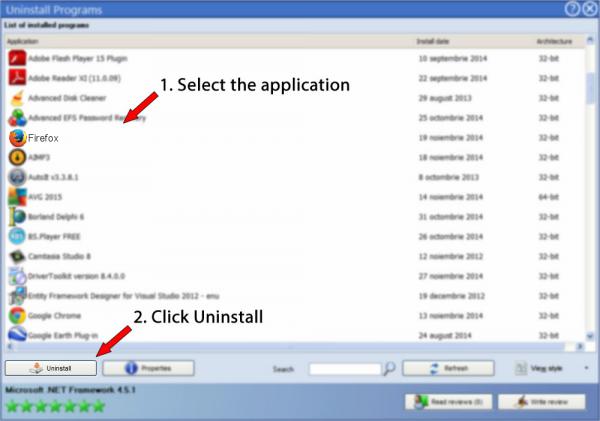 The text above is not a piece of advice to uninstall Firefox by Mozilla from your PC, we are not saying that Firefox by Mozilla is not a good application for your computer. This text simply contains detailed instructions on how to uninstall Firefox in case you decide this is what you want to do. Here you can find registry and disk entries that Advanced Uninstaller PRO discovered and classified as "leftovers" on other users' PCs.