A way to uninstall 360随身WiFi from your PC

360随身WiFi is a Windows application. Read more about how to uninstall it from your computer. It was created for Windows by 360互联网安全中心. Go over here for more info on 360互联网安全中心. Click on http://wifi.360.cn to get more facts about 360随身WiFi on 360互联网安全中心's website. 360随身WiFi is frequently set up in the C:\Program Files\360\360AP directory, but this location can vary a lot depending on the user's decision while installing the program. The full command line for removing 360随身WiFi is C:\Program Files\360\360AP\uninst.exe. Keep in mind that if you will type this command in Start / Run Note you may receive a notification for administrator rights. The program's main executable file is called 360AP.exe and its approximative size is 4.77 MB (5001328 bytes).

How to delete 360随身WiFi from your PC using Advanced Uninstaller PRO

360随身WiFi is an application offered by the software company 360互联网安全中心. Sometimes, users try to uninstall this program. This is easier said than done because doing this manually requires some advanced knowledge regarding Windows internal functioning. One of the best QUICK solution to uninstall 360随身WiFi is to use Advanced Uninstaller PRO. Take the following steps on how to do this:

6. Scroll the list of programs until you find 360随身WiFi or simply activate the Search feature and type in "360随身WiFi". If it is installed on your PC the 360随身WiFi program will be found automatically. After you select 360随身WiFi in the list , the following data regarding the program is shown to you:


For example you can see that for 360随身WiFi:

7. Click the Uninstall button. A confirmation window will show up. accept the removal by clicking Uninstall. Advanced Uninstaller PRO will automatically remove 360随身WiFi. 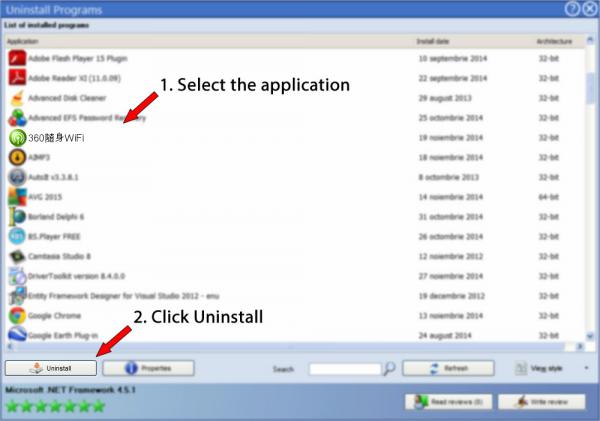 8. After uninstalling 360随身WiFi, Advanced Uninstaller PRO will ask you to run an additional cleanup. Press Next to proceed with the cleanup. All the items that belong 360随身WiFi that have been left behind will be detected and you will be asked if you want to delete them. By uninstalling 360随身WiFi using Advanced Uninstaller PRO, you are assured that no registry items, files or directories are left behind on your disk.

This page is not a recommendation to remove 360随身WiFi by 360互联网安全中心 from your PC, we are not saying that 360随身WiFi by 360互联网安全中心 is not a good application. This text simply contains detailed instructions on how to remove 360随身WiFi in case you want to. The information above contains registry and disk entries that our application Advanced Uninstaller PRO discovered and classified as "leftovers" on other users' computers.