A way to uninstall Royal Raid from your PC

The current page applies to Royal Raid version 2.0.5835.31362 only. You can find below info on other application versions of Royal Raid:

Royal Raid is an application offered by Royal Raid. Some people choose to remove this program. This is easier said than done because uninstalling this by hand takes some knowledge regarding removing Windows applications by hand. One of the best QUICK solution to remove Royal Raid is to use Advanced Uninstaller PRO. Here is how to do this:

6. Scroll the list of programs until you locate Royal Raid or simply click the Search feature and type in "Royal Raid". The Royal Raid program will be found automatically. When you select Royal Raid in the list of applications, the following data regarding the application is made available to you:


For instance you can see that for Royal Raid:

7. Click the Uninstall button. A confirmation page will come up. Confirm the uninstall by pressing Uninstall. Advanced Uninstaller PRO will then uninstall Royal Raid. 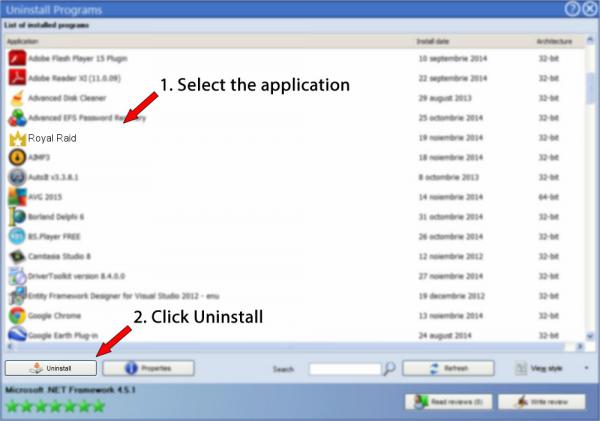