A way to uninstall Norton 360 from your computer

The information on this page is only about version 20.1.1.2 of Norton 360. Click on the links below for other Norton 360 versions:

Norton 360 is an application released by the software company Symantec Corporation. Sometimes, computer users want to erase this application. Sometimes this can be difficult because deleting this by hand requires some know-how related to removing Windows programs manually. The best SIMPLE solution to erase Norton 360 is to use Advanced Uninstaller PRO. Here is how to do this:


For example you can see that for Norton 360:

7. Press the Uninstall button. A confirmation window will come up. Confirm the removal by pressing Uninstall. Advanced Uninstaller PRO will automatically remove Norton 360. 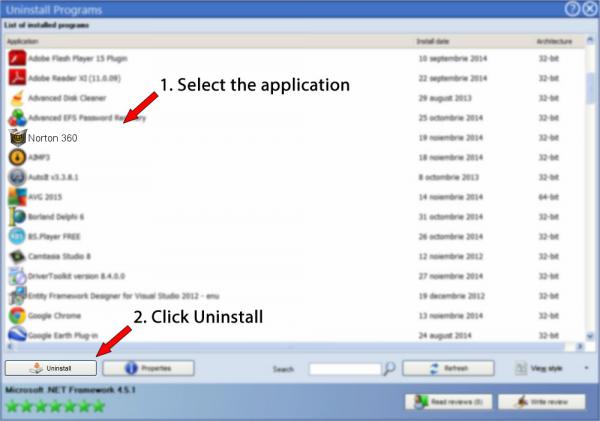 8. After uninstalling Norton 360, Advanced Uninstaller PRO will offer to run an additional cleanup. Press Next to perform the cleanup. All the items of Norton 360 which have been left behind will be detected and you will be asked if you want to delete them. By uninstalling Norton 360 with Advanced Uninstaller PRO, you are assured that no registry entries, files or folders are left behind on your system.

The text above is not a piece of advice to uninstall Norton 360 by Symantec Corporation from your computer, we are not saying that Norton 360 by Symantec Corporation is not a good application for your computer. This text simply contains detailed info on how to uninstall Norton 360 supposing you decide this is what you want to do. Here you can find registry and disk entries that Advanced Uninstaller PRO discovered and classified as "leftovers" on other users' PCs.