A way to uninstall FindRight from your PC

FindRight is a Windows program. Read more about how to uninstall it from your PC. It is developed by FindRight. You can find out more on FindRight or check for application updates here. Click on http://myfindright.com/support to get more information about FindRight on FindRight's website. The program is usually located in the C:\Program Files (x86)\FindRight folder (same installation drive as Windows). You can remove FindRight by clicking on the Start menu of Windows and pasting the command line C:\Program Files (x86)\FindRight\FindRightUn.exe OFS_. Note that you might get a notification for administrator rights. The program's main executable file has a size of 1.71 MB (1791216 bytes) on disk and is named FindRight.BOAS.exe.

FindRight is composed of the following executables which take 8.20 MB (8601521 bytes) on disk:

The current web page applies to FindRight version 2014.02.26.051729 only. You can find below info on other releases of FindRight:

...click to view all...
If you are manually uninstalling FindRight we suggest you to verify if the following data is left behind on your PC.

FindRight is an application offered by the software company FindRight. Some people choose to remove it. Sometimes this is troublesome because uninstalling this manually takes some advanced knowledge regarding Windows program uninstallation. The best EASY practice to remove FindRight is to use Advanced Uninstaller PRO. Take the following steps on how to do this:

6. Scroll the list of programs until you locate FindRight or simply activate the Search field and type in "FindRight". The FindRight application will be found automatically. When you click FindRight in the list of apps, the following information regarding the application is shown to you:


For example you can see that for FindRight:

7. Click the Uninstall button. A confirmation dialog will show up. accept the removal by clicking Uninstall. Advanced Uninstaller PRO will then uninstall FindRight. 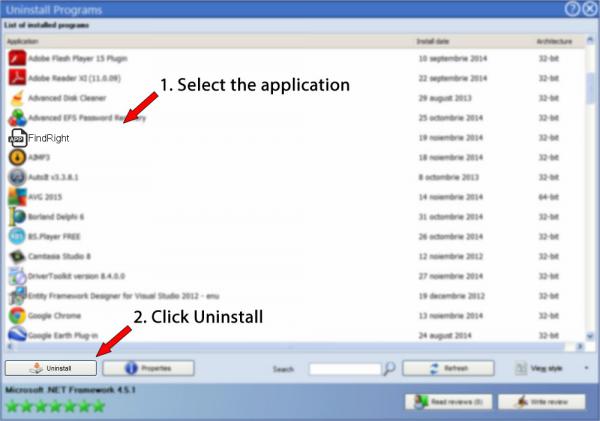