How to uninstall Finale 2012 from your PC

This web page contains detailed information on how to remove Finale 2012 for Windows. It was created for Windows by MakeMusic. Go over here for more info on MakeMusic. More information about Finale 2012 can be found at http://www.finalemusic.com/support.aspx. The program is frequently found in the C:\Program Files (x86)\Finale 2012 directory (same installation drive as Windows). You can uninstall Finale 2012 by clicking on the Start menu of Windows and pasting the command line C:\Program Files (x86)\Finale 2012\uninstallFinale.exe. Keep in mind that you might receive a notification for administrator rights. The application's main executable file is titled Finale.exe and its approximative size is 29.90 MB (31351352 bytes).

Finale 2012 is an application marketed by the software company MakeMusic. Frequently, computer users choose to erase this application. Sometimes this can be hard because deleting this by hand takes some know-how regarding Windows program uninstallation. The best SIMPLE approach to erase Finale 2012 is to use Advanced Uninstaller PRO. Here is how to do this:

7. Click the Uninstall button. A confirmation dialog will show up. accept the uninstall by clicking Uninstall. Advanced Uninstaller PRO will automatically uninstall Finale 2012. 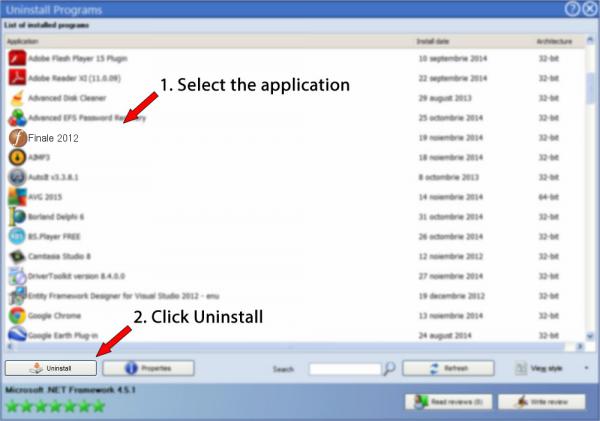