A way to uninstall EZmix 32-bit from your computer

EZmix 32-bit is a software application. This page contains details on how to uninstall it from your computer. It is made by Toontrack. More data about Toontrack can be found here. You can read more about related to EZmix 32-bit at http://www.toontrack.com. Usually the EZmix 32-bit application is installed in the C:\Program Files (x86)\Toontrack folder, depending on the user's option during setup. The full uninstall command line for EZmix 32-bit is MsiExec.exe /X{3F61A038-B357-4F66-8384-E1A635BE300E}. EZmix 32-bit's main file takes around 4.76 MB (4991072 bytes) and its name is EZmix.exe.


The information on this page is only about version 2.2.1 of EZmix 32-bit. You can find here a few links to other EZmix 32-bit versions:

EZmix 32-bit is a program released by Toontrack. Some users choose to erase it. This can be easier said than done because performing this manually takes some skill related to Windows internal functioning. One of the best QUICK action to erase EZmix 32-bit is to use Advanced Uninstaller PRO. Take the following steps on how to do this:

7. Click the Uninstall button. A confirmation window will show up. Confirm the uninstall by clicking Uninstall. Advanced Uninstaller PRO will then uninstall EZmix 32-bit. 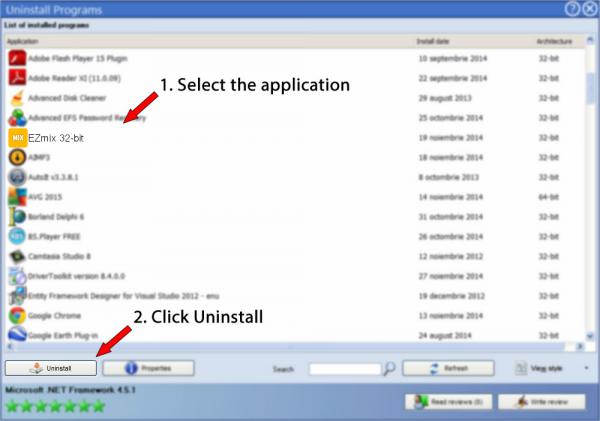