A guide to uninstall EZmix 32-bit from your system

This page is about EZmix 32-bit for Windows. Here you can find details on how to remove it from your computer. It is written by Toontrack. Further information on Toontrack can be seen here. Click on http://www.toontrack.com to get more data about EZmix 32-bit on Toontrack's website. The program is often located in the C:\Program Files (x86)\Toontrack folder. Take into account that this path can vary being determined by the user's choice. EZmix 32-bit's complete uninstall command line is MsiExec.exe /X{B5AB1F3A-136C-4C87-BB49-0E3ACD5B9F7C}. EZmix.exe is the EZmix 32-bit's primary executable file and it occupies close to 2.75 MB (2881536 bytes) on disk.

This web page is about EZmix 32-bit version 2.0.2 alone. You can find here a few links to other EZmix 32-bit releases:

EZmix 32-bit is a program marketed by Toontrack. Frequently, people decide to uninstall this application. Sometimes this is easier said than done because deleting this by hand takes some skill related to removing Windows programs manually. The best EASY approach to uninstall EZmix 32-bit is to use Advanced Uninstaller PRO. Here are some detailed instructions about how to do this:

6. Navigate the list of applications until you locate EZmix 32-bit or simply click the Search feature and type in "EZmix 32-bit". The EZmix 32-bit program will be found very quickly. Notice that when you select EZmix 32-bit in the list of programs, the following data regarding the program is available to you:

7. Press the Uninstall button. A window asking you to confirm will show up. Confirm the removal by pressing Uninstall. Advanced Uninstaller PRO will remove EZmix 32-bit. 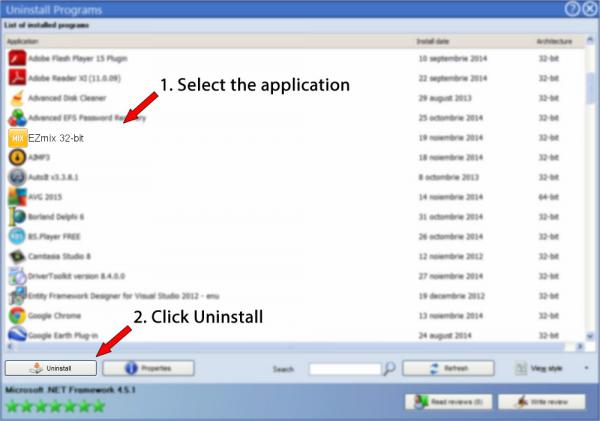