A way to uninstall Diablo III from your system

The following executables are installed alongside Diablo III. They take about 29.12 MB (30535752 bytes) on disk.

You can find below info on other versions of Diablo III:

...click to view all...
When you're planning to uninstall Diablo III you should check if the following data is left behind on your PC.

Diablo III is a program offered by Blizzard Entertainment. Some computer users want to erase this application. Sometimes this is troublesome because performing this by hand requires some knowledge regarding removing Windows applications by hand. The best SIMPLE way to erase Diablo III is to use Advanced Uninstaller PRO. Here is how to do this:

6. Scroll the list of programs until you locate Diablo III or simply activate the Search feature and type in "Diablo III". If it is installed on your PC the Diablo III application will be found very quickly. When you select Diablo III in the list of applications, the following data regarding the application is made available to you:


For instance you can see that for Diablo III: 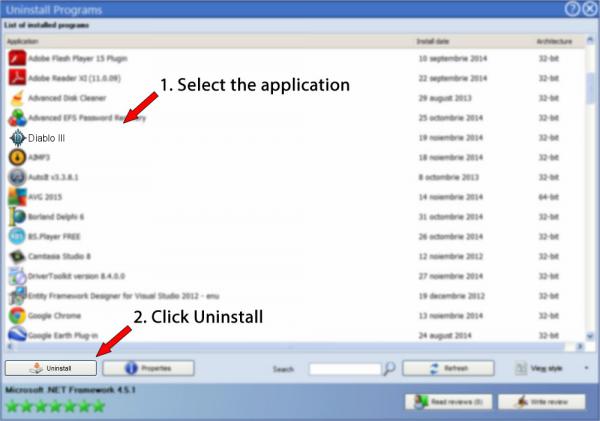 This page is not a recommendation to remove Diablo III by Blizzard Entertainment from your PC, nor are we saying that Diablo III by Blizzard Entertainment is not a good software application. This page only contains detailed info on how to remove Diablo III in case you decide this is what you want to do. The information above contains registry and disk entries that other software left behind and Advanced Uninstaller PRO discovered and classified as "leftovers" on other users' computers.