A guide to uninstall pb_karmoz 9706 from your computer

This info is about pb_karmoz 9706 for Windows. Here you can find details on how to remove it from your PC. It is developed by simia5. You can find out more on simia5 or check for application updates here. Click on http://www.simia5.ir to get more information about pb_karmoz 9706 on simia5's website. The program is usually placed in the C:\Program Files\simia5\pb_karmoz directory. Take into account that this path can differ depending on the user's decision. The full command line for removing pb_karmoz 9706 is C:\Program Files\simia5\pb_karmoz\Uninstall.exe. Keep in mind that if you will type this command in Start / Run Note you may be prompted for admin rights. Uninstall.exe is the pb_karmoz 9706's main executable file and it occupies close to 144.87 KB (148347 bytes) on disk.

pb_karmoz 9706 is an application marketed by simia5. Some computer users want to remove this program. This can be difficult because doing this manually requires some experience regarding PCs. The best EASY solution to remove pb_karmoz 9706 is to use Advanced Uninstaller PRO. Here is how to do this:


For instance you can see that for pb_karmoz 9706: 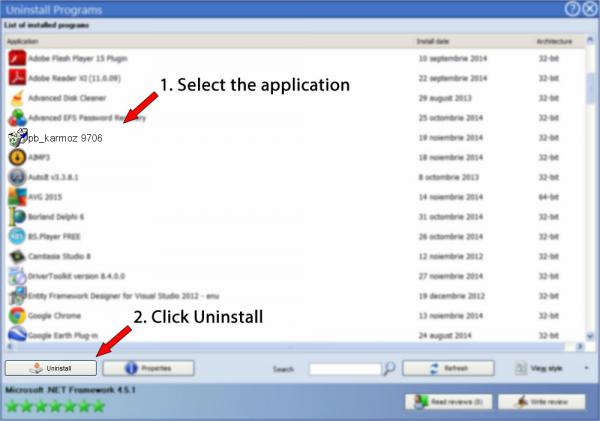