How to uninstall World Cup 2014 from your system

World Cup 2014 is a software application. This page holds details on how to uninstall it from your PC. It was coded for Windows by Hi-VU. You can find out more on Hi-VU or check for application updates here. The application is frequently installed in the C:\Program Files (x86)\Hi-VU\World Cup 2014 directory. Keep in mind that this path can differ depending on the user's choice. You can remove World Cup 2014 by clicking on the Start menu of Windows and pasting the command line msiexec.exe /x {A2020E9A-EF1B-4CAB-AE22-3818D3F5F8DD}. Keep in mind that you might be prompted for admin rights. pes2014.exe is the World Cup 2014's primary executable file and it takes circa 29.50 MB (30938112 bytes) on disk.

World Cup 2014 is an application offered by Hi-VU. Frequently, users decide to remove it. This can be efortful because uninstalling this by hand takes some experience related to removing Windows programs manually. The best EASY solution to remove World Cup 2014 is to use Advanced Uninstaller PRO. Here are some detailed instructions about how to do this: 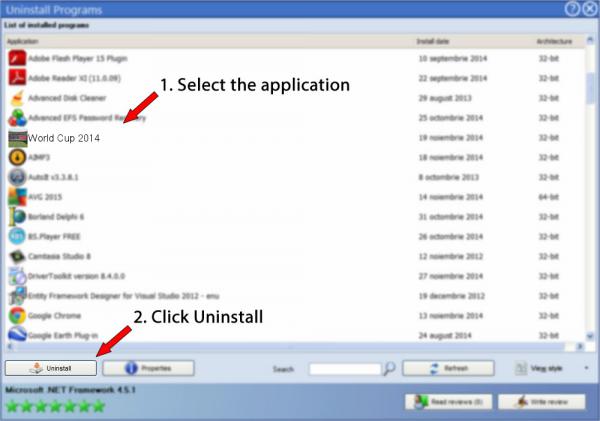