A guide to uninstall WayTek 2017 Catalog 229 from your computer

WayTek 2017 Catalog 229 is a computer program. This page contains details on how to uninstall it from your computer. The Windows release was created by Nxtbook Media, LLC. Further information on Nxtbook Media, LLC can be seen here. The program is often found in the C:\Program Files (x86)\waytek\general\waytek_catalog229 directory (same installation drive as Windows). The full command line for removing WayTek 2017 Catalog 229 is msiexec /qb /x {DE086BF2-9545-8B33-5D10-0E76E5E7D0BF}. Keep in mind that if you will type this command in Start / Run Note you might receive a notification for admin rights. waytek_catalog229.exe is the programs's main file and it takes around 139.00 KB (142336 bytes) on disk.

WayTek 2017 Catalog 229 is a program released by Nxtbook Media, LLC. Frequently, computer users try to remove this program. Sometimes this can be troublesome because performing this manually takes some know-how related to removing Windows applications by hand. One of the best EASY approach to remove WayTek 2017 Catalog 229 is to use Advanced Uninstaller PRO. Here are some detailed instructions about how to do this: 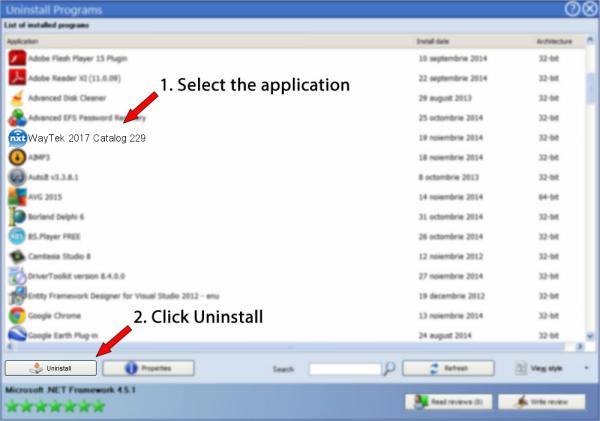