A guide to uninstall WapSter AQQ from your system

This info is about WapSter AQQ for Windows. Below you can find details on how to uninstall it from your computer. The Windows release was developed by Creative Team S.A.. More information about Creative Team S.A. can be seen here. WapSter AQQ is normally set up in the C:\Program Files\WapSter\WapSter AQQ directory, but this location may differ a lot depending on the user's choice while installing the application. WapSter AQQ's full uninstall command line is C:\Program Files\WapSter\WapSter AQQ\uninstall.exe. AQQ.exe is the WapSter AQQ's primary executable file and it occupies approximately 9.96 MB (10441728 bytes) on disk.

WapSter AQQ is a program by the software company Creative Team S.A.. Some users choose to erase it. Sometimes this is troublesome because performing this by hand takes some experience regarding PCs. The best QUICK manner to erase WapSter AQQ is to use Advanced Uninstaller PRO. Here are some detailed instructions about how to do this:


7. Press the Uninstall button. A confirmation window will show up. Confirm the uninstall by clicking Uninstall. Advanced Uninstaller PRO will uninstall WapSter AQQ. 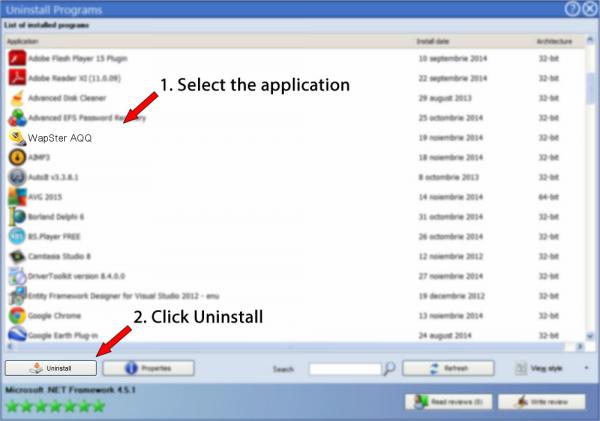