VirCA 0.2.605 is a software application. This page holds details on how to uninstall it from your computer. It was created for Windows by MTA-SZTAKI. Additional info about MTA-SZTAKI can be seen here. More details about the software VirCA 0.2.605 can be found at http://www.virca.hu. The application is often located in the C:\Program Files (x86)\VirCA\VirCA 0.2.605 folder (same installation drive as Windows). The complete uninstall command line for VirCA 0.2.605 is C:\Program Files (x86)\VirCA\VirCA 0.2.605\uninst.exe. VirCA.exe is the programs's main file and it takes circa 3.53 MB (3700224 bytes) on disk.

A way to remove VirCA 0.2.605 from your PC using Advanced Uninstaller PRO

VirCA 0.2.605 is a program by the software company MTA-SZTAKI. Sometimes, people want to erase this application. This can be hard because performing this manually takes some know-how regarding Windows internal functioning. The best SIMPLE way to erase VirCA 0.2.605 is to use Advanced Uninstaller PRO. Take the following steps on how to do this: 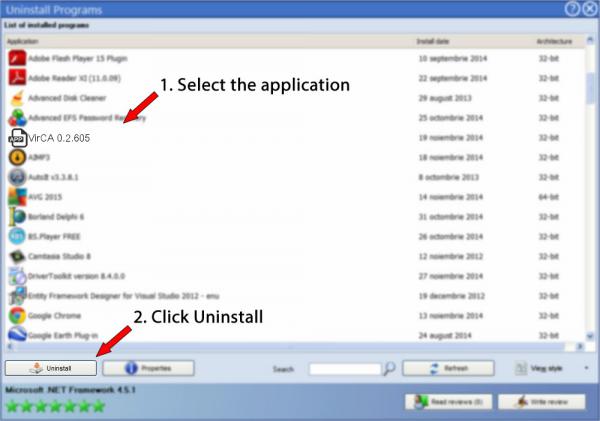