This page is about Velneo V7 (7.17.1.13288) for Windows. Below you can find details on how to uninstall it from your PC. It was coded for Windows by Velneo, S.A.. Check out here where you can find out more on Velneo, S.A.. More details about the application Velneo V7 (7.17.1.13288) can be found at http://www.velneo.com. The application is frequently located in the C:\Program Files (x86)\Velneo\V7 folder (same installation drive as Windows). You can uninstall Velneo V7 (7.17.1.13288) by clicking on the Start menu of Windows and pasting the command line C:\Program Files (x86)\Velneo\V7\uninstall-velneov7.exe. Note that you might receive a notification for administrator rights. uninstall-velneov7.exe is the programs's main file and it takes circa 135.69 KB (138942 bytes) on disk.

7. Press the Uninstall button. A window asking you to confirm will come up. Confirm the uninstall by clicking Uninstall. Advanced Uninstaller PRO will automatically uninstall Velneo V7 (7.17.1.13288). 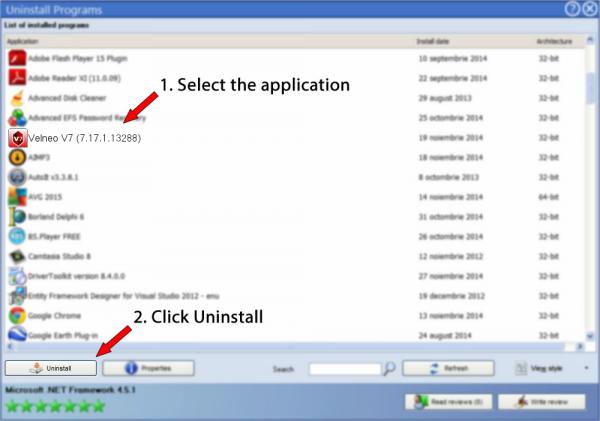