A way to uninstall Total War Rome II from your system

Total War Rome II is a Windows application. Read more about how to uninstall it from your computer. It is written by Sega. Go over here for more information on Sega. Please open http://www.Sega.com if you want to read more on Total War Rome II on Sega's website. The program is usually located in the C:\Program Files (x86)\Sega\Total War Rome II folder. Keep in mind that this path can vary depending on the user's preference. Total War Rome II's entire uninstall command line is "C:\Program Files (x86)\InstallShield Installation Information\{F3CC05D2-6D13-473C-B4DE-FE7B1A0109E3}\setup.exe" -runfromtemp -l0x0009 -removeonly. Rome2.exe is the programs's main file and it takes circa 507.55 KB (519728 bytes) on disk.

The following executables are installed along with Total War Rome II. They occupy about 13.24 MB (13883969 bytes) on disk.


For instance you can see that for Total War Rome II: 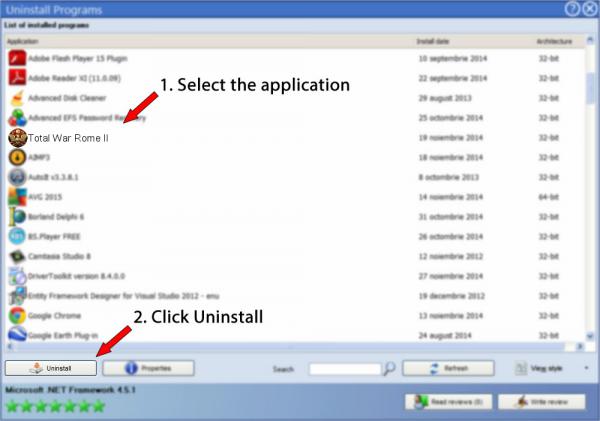