A guide to uninstall Taxprep Forms 2013 from your system

This web page is about Taxprep Forms 2013 for Windows. Below you can find details on how to uninstall it from your PC. The Windows version was created by Wolters Kluwer Limited. You can read more on Wolters Kluwer Limited or check for application updates here. More information about the application Taxprep Forms 2013 can be seen at http://www.taxprep.com. The program is frequently found in the C:\Program Files (x86)\CCH\Taxprep Forms 2013 folder. Keep in mind that this path can vary depending on the user's preference. You can remove Taxprep Forms 2013 by clicking on the Start menu of Windows and pasting the command line MsiExec.exe /I{A81452AB-4ED6-4996-ACE2-FBFE85E0A333}. Keep in mind that you might get a notification for admin rights. FormsTxp2013.exe is the programs's main file and it takes close to 12.65 MB (13259264 bytes) on disk.


For example you can see that for Taxprep Forms 2013: 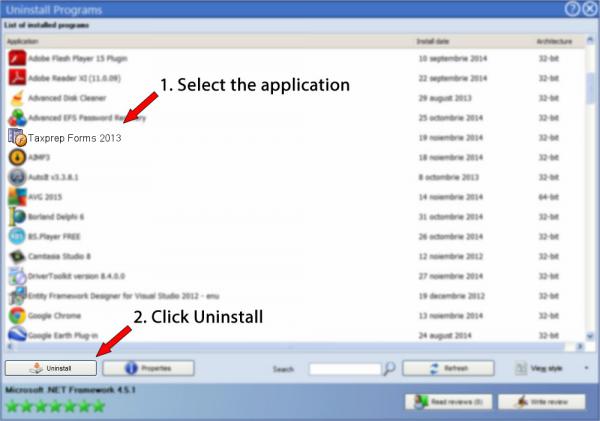