How to uninstall TOSHIBA Mic Effect from your system

This page is about TOSHIBA Mic Effect for Windows. Here you can find details on how to uninstall it from your computer. It is made by TOSHIBA. Additional info about TOSHIBA can be found here. The program is usually placed in the C:\Program Files\TOSHIBA\TAudEffect folder (same installation drive as Windows). TOSHIBA Mic Effect's complete uninstall command line is C:\Program Files\InstallShield Installation Information\{0577A2AA-DEA0-4D40-8372-4211102D43E4}\setup.exe -runfromtemp -l0x0009 -removeonly. The application's main executable file occupies 336.08 KB (344144 bytes) on disk and is labeled TAudEff.exe.

TOSHIBA Mic Effect installs the following the executables on your PC, taking about 336.08 KB (344144 bytes) on disk.

This web page is about TOSHIBA Mic Effect version 2.08.04 alone.


7. Click the Uninstall button. A window asking you to confirm will come up. Confirm the uninstall by pressing Uninstall. Advanced Uninstaller PRO will remove TOSHIBA Mic Effect. 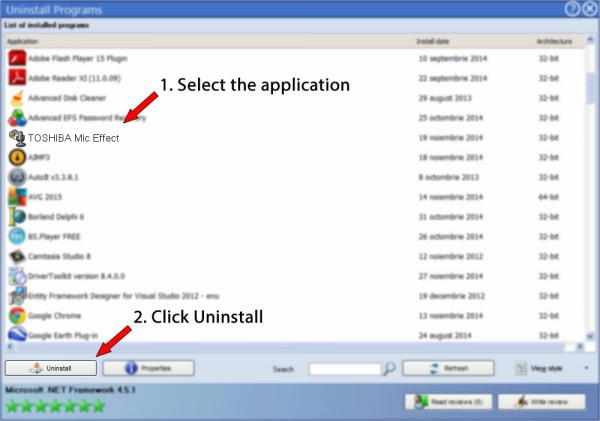