A guide to uninstall TL DDP Player from your PC

TL DDP Player is a Windows program. Read below about how to remove it from your computer. It was developed for Windows by Sonoris Audio Engineering. You can find out more on Sonoris Audio Engineering or check for application updates here. Usually the TL DDP Player application is installed in the C:\Program Files (x86)\TL\DDP_Player directory, depending on the user's option during setup. The full uninstall command line for TL DDP Player is C:\Program Files (x86)\TL\DDP_Player\uninstall.exe. DDP_Player.exe is the programs's main file and it takes close to 7.18 MB (7533568 bytes) on disk.

TL DDP Player installs the following the executables on your PC, taking about 7.24 MB (7589974 bytes) on disk.

TL DDP Player is a program marketed by the software company Sonoris Audio Engineering. Frequently, people decide to uninstall this application. This can be difficult because doing this manually requires some skill regarding Windows program uninstallation. One of the best SIMPLE manner to uninstall TL DDP Player is to use Advanced Uninstaller PRO. Take the following steps on how to do this:


7. Press the Uninstall button. A window asking you to confirm will appear. accept the uninstall by pressing Uninstall. Advanced Uninstaller PRO will then uninstall TL DDP Player. 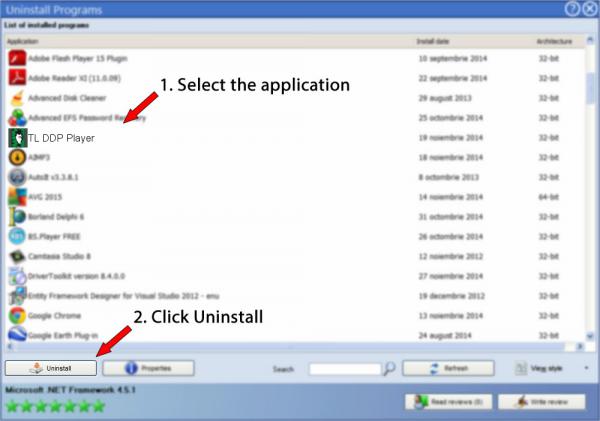