A way to uninstall Race The Sun from your system

Race The Sun is a computer program. This page is comprised of details on how to remove it from your PC. It is developed by Flippfly LLC. More information about Flippfly LLC can be found here. Please open http://flippfly.com/racethesun/ if you want to read more on Race The Sun on Flippfly LLC's website. Usually the Race The Sun program is installed in the C:\Program Files (x86)\Steam folder, depending on the user's option during setup. Race The Sun's entire uninstall command line is C:\Program Files (x86)\Steam\steam.exe. Steam.exe is the programs's main file and it takes approximately 2.78 MB (2917456 bytes) on disk.


...click to view all... After the uninstall process, the application leaves some files behind on the computer. Part_A few of these are shown below.

Race The Sun is a program offered by the software company Flippfly LLC. Some users decide to remove this program. This can be easier said than done because removing this manually requires some skill related to PCs. One of the best EASY manner to remove Race The Sun is to use Advanced Uninstaller PRO. Take the following steps on how to do this:


For instance you can see that for Race The Sun:

7. Press the Uninstall button. A confirmation window will appear. Confirm the removal by clicking Uninstall. Advanced Uninstaller PRO will then uninstall Race The Sun. 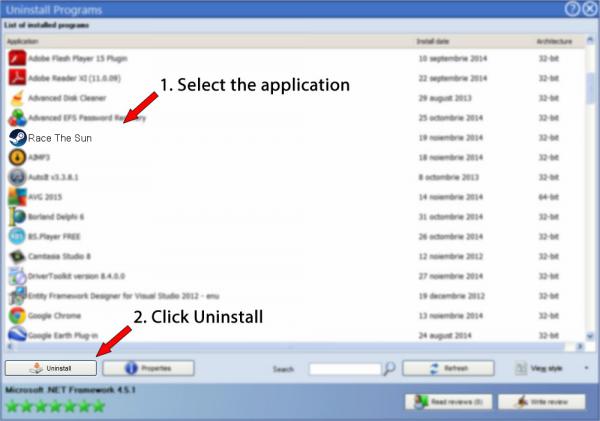