How to uninstall Powerpoint from your PC

Powerpoint is a Windows program. Read below about how to remove it from your computer. The Windows release was developed by Mis à disposition par Citrix. Further information on Mis à disposition par Citrix can be found here. The application is frequently located in the C:\Program Files (x86)\Citrix\SelfServicePlugin folder (same installation drive as Windows). Powerpoint's full uninstall command line is C:\Program Files (x86)\Citrix\SelfServicePlugin\SelfServiceUninstaller.exe -u "www-803360e0@@Infosaas XenApp 6:Powerpoint". Powerpoint's main file takes around 3.01 MB (3153800 bytes) and is named SelfService.exe.

Powerpoint is composed of the following executables which take 3.24 MB (3398176 bytes) on disk:

The current page applies to Powerpoint version 1.0 only.

How to remove Powerpoint with Advanced Uninstaller PRO

Powerpoint is a program offered by the software company Mis à disposition par Citrix. Sometimes, computer users try to erase it. Sometimes this is troublesome because performing this manually requires some experience regarding PCs. The best SIMPLE action to erase Powerpoint is to use Advanced Uninstaller PRO. Take the following steps on how to do this:

6. Scroll the list of programs until you find Powerpoint or simply click the Search field and type in "Powerpoint". If it exists on your system the Powerpoint application will be found automatically. Notice that after you click Powerpoint in the list of apps, some data regarding the program is available to you:


7. Press the Uninstall button. A window asking you to confirm will appear. Confirm the removal by clicking Uninstall. Advanced Uninstaller PRO will remove Powerpoint. 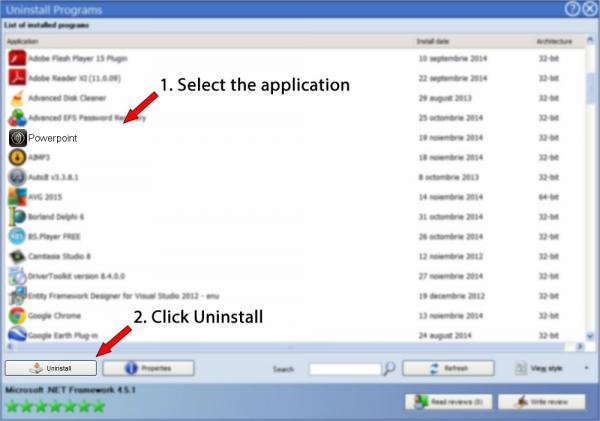 The text above is not a recommendation to uninstall Powerpoint by Mis à disposition par Citrix from your computer, nor are we saying that Powerpoint by Mis à disposition par Citrix is not a good software application. This text simply contains detailed instructions on how to uninstall Powerpoint supposing you want to. Here you can find registry and disk entries that other software left behind and Advanced Uninstaller PRO stumbled upon and classified as "leftovers" on other users' PCs.