A guide to uninstall Pixia ver. 6 from your computer

Pixia ver. 6 is a computer program. This page contains details on how to remove it from your computer. It was coded for Windows by Isao Maruoka. More data about Isao Maruoka can be read here. Click on http://www.pixia.jp/ to get more data about Pixia ver. 6 on Isao Maruoka's website. The program is usually placed in the C:\Program Files (x86)\Pixia6 folder. Take into account that this location can differ depending on the user's choice. You can uninstall Pixia ver. 6 by clicking on the Start menu of Windows and pasting the command line C:\Program Files (x86)\InstallShield Installation Information\{0D04A4D2-7CE9-4EC2-970F-4A639D721D46}\setup.exe. Note that you might get a notification for administrator rights. The application's main executable file occupies 8.48 MB (8893464 bytes) on disk and is called pixia.exe.

A way to erase Pixia ver. 6 with Advanced Uninstaller PRO

Pixia ver. 6 is a program released by Isao Maruoka. Sometimes, people decide to remove this application. This is easier said than done because removing this manually takes some experience related to Windows program uninstallation. One of the best QUICK way to remove Pixia ver. 6 is to use Advanced Uninstaller PRO. Here is how to do this:

7. Press the Uninstall button. A window asking you to confirm will appear. accept the removal by clicking Uninstall. Advanced Uninstaller PRO will uninstall Pixia ver. 6. 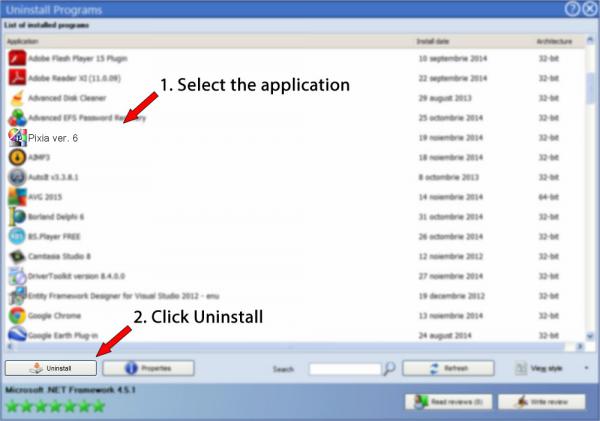