A guide to uninstall Pixia ver. 5 from your PC

You can find below detailed information on how to uninstall Pixia ver. 5 for Windows. It is written by Isao Maruoka. Further information on Isao Maruoka can be seen here. You can read more about on Pixia ver. 5 at http://www.pixia.jp/. The application is usually placed in the C:\Program Files (x86)\Pixia5 folder. Take into account that this location can vary being determined by the user's preference. Pixia ver. 5's entire uninstall command line is "C:\Program Files (x86)\InstallShield Installation Information\{857320B3-01D9-4199-B9A7-0781F407F35B}\setup.exe" -runfromtemp -l0x0411 -removeonly. The program's main executable file occupies 8.53 MB (8947736 bytes) on disk and is called pixia.exe.

How to delete Pixia ver. 5 from your PC using Advanced Uninstaller PRO

Pixia ver. 5 is an application marketed by the software company Isao Maruoka. Sometimes, users want to uninstall it. Sometimes this is troublesome because removing this manually requires some experience related to PCs. The best SIMPLE solution to uninstall Pixia ver. 5 is to use Advanced Uninstaller PRO. Take the following steps on how to do this:


For example you can see that for Pixia ver. 5: 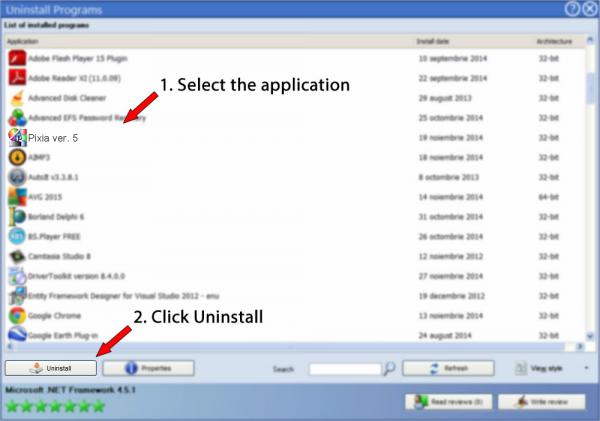