A guide to uninstall Panzer Elite from your system

Panzer Elite is a software application. This page holds details on how to uninstall it from your computer. The Windows release was created by GOG.com. Further information on GOG.com can be found here. More info about the software Panzer Elite can be seen at http://www.gog.com. Panzer Elite is frequently set up in the C:\Program Files (x86)\GOG.com\Panzer Elite directory, however this location may differ a lot depending on the user's choice while installing the program. The complete uninstall command line for Panzer Elite is C:\Program Files (x86)\GOG.com\Panzer Elite\unins000.exe. The application's main executable file is named Panzer_Elite.exe and its approximative size is 40.00 KB (40960 bytes).

The following executable files are contained in Panzer Elite. They take 3.83 MB (4016467 bytes) on disk.


Some files and registry entries are regularly left behind when you uninstall Panzer Elite.

Directories that were found:

Many times the following registry keys will not be removed:

Panzer Elite is a program marketed by GOG.com. Some users try to uninstall it. This is troublesome because performing this manually requires some know-how regarding removing Windows applications by hand. One of the best QUICK action to uninstall Panzer Elite is to use Advanced Uninstaller PRO. Here is how to do this:


For instance you can see that for Panzer Elite: 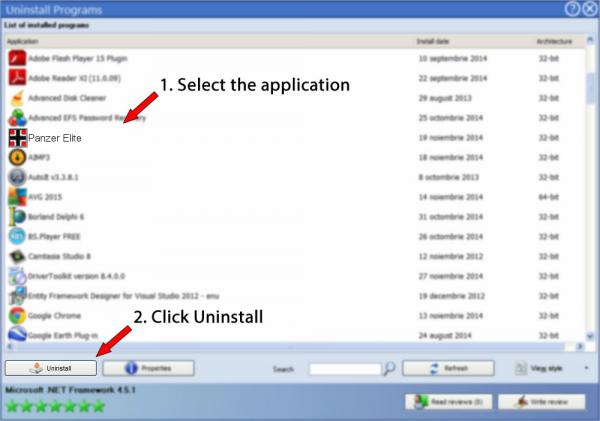