How to uninstall Outpost Kaloki from your PC

Outpost Kaloki is a Windows application. Read below about how to uninstall it from your computer. It was created for Windows by WildTangent. Take a look here for more info on WildTangent. More info about the application Outpost Kaloki can be seen at http://support.wildgames.com. The application is often located in the C:\Program Files (x86)\WildTangent Games\Games\OutpostKaloki directory. Keep in mind that this location can vary being determined by the user's preference. The full command line for uninstalling Outpost Kaloki is "C:\Program Files (x86)\WildTangent Games\Games\OutpostKaloki\uninstall\uninstaller.exe". Note that if you will type this command in Start / Run Note you might be prompted for administrator rights. OutpostK-WT.exe is the Outpost Kaloki's primary executable file and it occupies close to 1.82 MB (1907536 bytes) on disk.

Outpost Kaloki is comprised of the following executables which take 2.93 MB (3071984 bytes) on disk:

The information on this page is only about version 2.2.0.95 of Outpost Kaloki.


For example you can see that for Outpost Kaloki:

7. Click the Uninstall button. A window asking you to confirm will come up. Confirm the removal by pressing Uninstall. Advanced Uninstaller PRO will remove Outpost Kaloki. 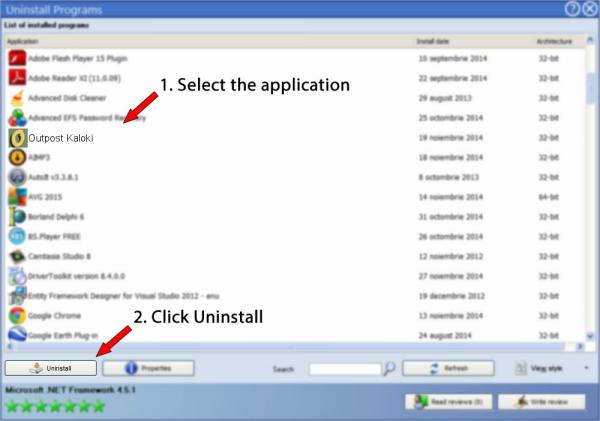