A way to uninstall Notrium from your PC

Notrium is a computer program. This page is comprised of details on how to uninstall it from your PC. It was coded for Windows by monkkonen.net. Take a look here where you can get more info on monkkonen.net. More details about Notrium can be seen at http://www.monkkonen.net/. Usually the Notrium application is installed in the C:\Program Files (x86)\Notrium folder, depending on the user's option during install. Notrium's full uninstall command line is C:\Program Files (x86)\Notrium\unins000.exe. The program's main executable file is called Notrium.exe and its approximative size is 848.00 KB (868352 bytes).

Notrium is composed of the following executables which occupy 2.08 MB (2177983 bytes) on disk:

Numerous files, folders and registry data can not be uninstalled when you remove Notrium from your computer.

Notrium is a program offered by the software company monkkonen.net. Sometimes, computer users decide to remove this application. This can be efortful because deleting this manually takes some know-how regarding removing Windows programs manually. One of the best QUICK procedure to remove Notrium is to use Advanced Uninstaller PRO. Here are some detailed instructions about how to do this:

6. Scroll the list of programs until you locate Notrium or simply click the Search field and type in "Notrium". If it is installed on your PC the Notrium app will be found very quickly. When you select Notrium in the list of apps, some information about the program is shown to you:


For instance you can see that for Notrium: 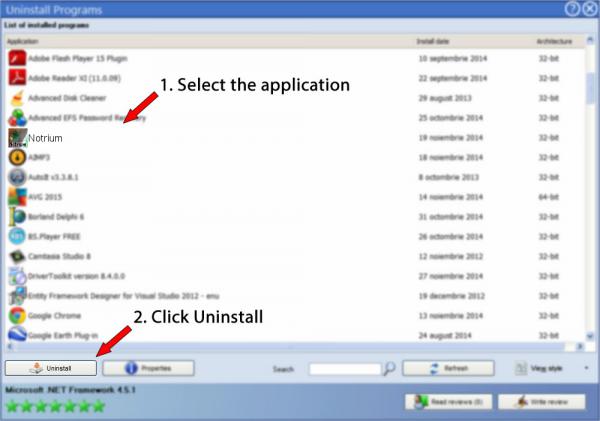 8. After removing Notrium, Advanced Uninstaller PRO will ask you to run an additional cleanup. Press Next to start the cleanup. All the items of Notrium which have been left behind will be detected and you will be able to delete them. By uninstalling Notrium using Advanced Uninstaller PRO, you can be sure that no Windows registry entries, files or folders are left behind on your disk.

The text above is not a recommendation to uninstall Notrium by monkkonen.net from your computer, we are not saying that Notrium by monkkonen.net is not a good application. This page only contains detailed instructions on how to uninstall Notrium in case you want to. Here you can find registry and disk entries that other software left behind and Advanced Uninstaller PRO discovered and classified as "leftovers" on other users' computers.