A way to uninstall Nero Recode from your system

Nero Recode is a software application. This page holds details on how to remove it from your computer. The Windows release was developed by Nero AG. Check out here where you can find out more on Nero AG. Please open http://www.nero.com/ if you want to read more on Nero Recode on Nero AG's website. The program is often located in the C:\Program Files (x86)\Nero directory. Take into account that this location can differ depending on the user's decision. MsiExec.exe /X{5B1886C1-6EFA-4D07-95D3-8B84C743CC71} is the full command line if you want to remove Nero Recode. The application's main executable file is titled Recode.exe and occupies 1.77 MB (1860944 bytes).

The information on this page is only about version 15.0.25000 of Nero Recode. Click on the links below for other Nero Recode versions:

Nero Recode is a program marketed by Nero AG. Frequently, people try to erase this application. This is hard because doing this manually takes some skill regarding removing Windows applications by hand. The best EASY action to erase Nero Recode is to use Advanced Uninstaller PRO. Here is how to do this:

5. All the applications existing on the computer will be made available to you


For instance you can see that for Nero Recode:

7. Press the Uninstall button. A window asking you to confirm will show up. accept the uninstall by pressing Uninstall. Advanced Uninstaller PRO will uninstall Nero Recode. 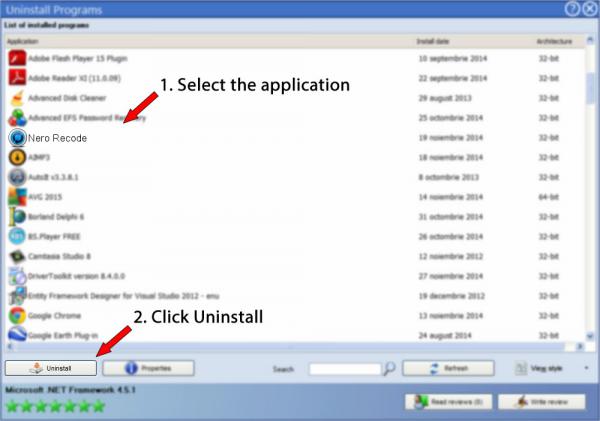 This page is not a recommendation to uninstall Nero Recode by Nero AG from your PC, nor are we saying that Nero Recode by Nero AG is not a good software application. This text only contains detailed info on how to uninstall Nero Recode in case you want to. Here you can find registry and disk entries that other software left behind and Advanced Uninstaller PRO discovered and classified as "leftovers" on other users' computers.