A guide to uninstall MAGIX Web Designer 9 from your system

MAGIX Web Designer 9 is a Windows program. Read more about how to remove it from your PC. It is produced by MAGIX AG. Take a look here where you can get more info on MAGIX AG. Usually the MAGIX Web Designer 9 application is to be found in the C:\Program Files (x86)\MAGIX\Web Designer 9 folder, depending on the user's option during setup. The full command line for removing MAGIX Web Designer 9 is C:\Program Files (x86)\Common Files\MAGIX Services\Uninstall\{6F8105D8-20FD-450F-9A04-E1C9C0D2B822}\Web_Designer_9_setup.exe. Keep in mind that if you will type this command in Start / Run Note you might be prompted for admin rights. The program's main executable file is labeled WebDesigner.exe and occupies 19.91 MB (20876032 bytes).

The following executables are installed alongside MAGIX Web Designer 9. They take about 23.06 MB (24184888 bytes) on disk.

MAGIX Web Designer 9 is an application marketed by MAGIX AG. Sometimes, computer users try to erase this program. Sometimes this can be efortful because uninstalling this by hand takes some experience regarding Windows program uninstallation. The best QUICK manner to erase MAGIX Web Designer 9 is to use Advanced Uninstaller PRO. Here are some detailed instructions about how to do this: 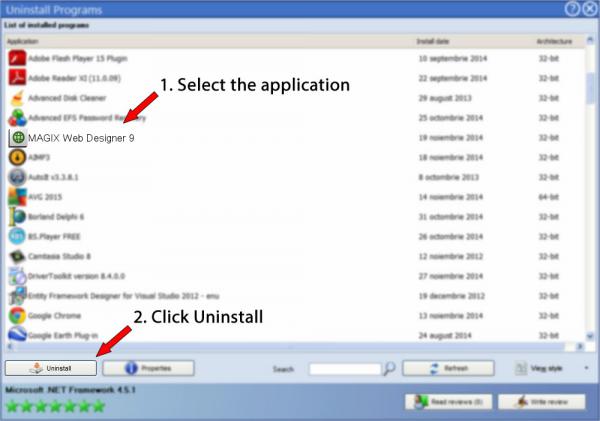