A guide to uninstall Klip Pal from your computer

This page contains detailed information on how to uninstall Klip Pal for Windows. It is developed by Klip Pal. Check out here where you can get more info on Klip Pal. More info about the software Klip Pal can be seen at http://klippal.com/support. Klip Pal is frequently installed in the C:\Program Files\Klip Pal directory, regulated by the user's choice. The full command line for removing Klip Pal is C:\Program Files\Klip Pal\KlipPaluninstall.exe. Note that if you will type this command in Start / Run Note you might be prompted for administrator rights. Klip Pal's primary file takes around 252.88 KB (258944 bytes) and is called KlipPalUninstall.exe.


The current web page applies to Klip Pal version 2014.11.10.062142 alone. You can find below info on other application versions of Klip Pal:

Klip Pal is an application by the software company Klip Pal. Frequently, computer users decide to erase this program. This is hard because uninstalling this by hand takes some experience related to removing Windows programs manually. The best SIMPLE practice to erase Klip Pal is to use Advanced Uninstaller PRO. Take the following steps on how to do this:


For instance you can see that for Klip Pal: 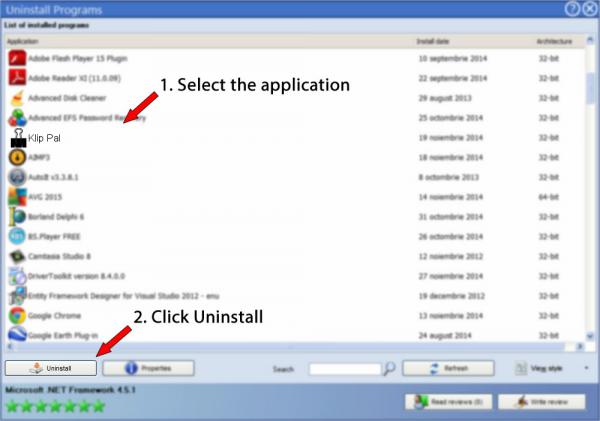 8. After removing Klip Pal, Advanced Uninstaller PRO will offer to run a cleanup. Press Next to go ahead with the cleanup. All the items of Klip Pal that have been left behind will be detected and you will be asked if you want to delete them. By removing Klip Pal with Advanced Uninstaller PRO, you can be sure that no registry entries, files or folders are left behind on your disk.