This info is about Java(TM) 6 Update 27 for Windows. Here you can find details on how to remove it from your computer. The Windows release was created by Oracle. More data about Oracle can be read here. Further information about Java(TM) 6 Update 27 can be seen at http://java.com. Usually the Java(TM) 6 Update 27 application is installed in the C:\Program Files (x86)\Java\jre6 folder, depending on the user's option during install. You can remove Java(TM) 6 Update 27 by clicking on the Start menu of Windows and pasting the command line MsiExec.exe /X{26A24AE4-039D-4CA4-87B4-2F83216027FF}. Note that you might get a notification for administrator rights. java.exe is the programs's main file and it takes circa 141.78 KB (145184 bytes) on disk.

Open regedit.exe to delete the registry values below from the Windows Registry:

Java(TM) 6 Update 27 is an application released by the software company Oracle. Some users try to remove it. Sometimes this can be hard because doing this by hand takes some skill regarding Windows program uninstallation. The best QUICK procedure to remove Java(TM) 6 Update 27 is to use Advanced Uninstaller PRO. Here are some detailed instructions about how to do this: 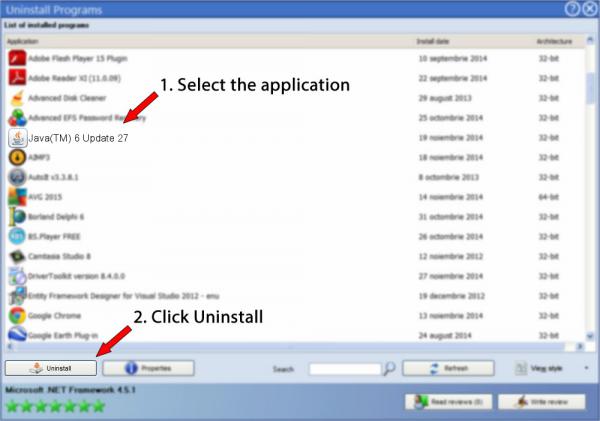